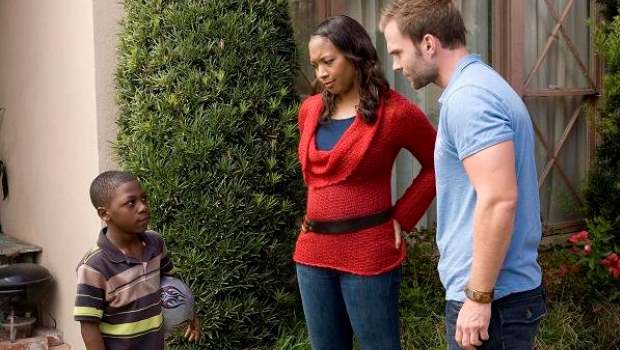 Summary: Role Models is not a well-structured film, with some glaring plot holes and a very predictable story, but the laugh count is so high that this is never a hindrance to its enjoyment.

Paul Rudd and Seann William Scott: not two names that, when emblazoned above a movie’s title, sway the average cinema patron’s choice of Friday night entertainment. But add “Mike from Friends” and “Stifler” to their names and suddenly recognition dawns. It’s debatable whether these two actors will ever step out of the shadows of their respective defining roles in the public consciousness, but Role Models represents the best evidence yet that both have much more to offer. True, their characters here are based firmly in each actor’s comfort zone – Rudd’s Danny is a quick-witted, sarcastic cynic, Scott’s Wheeler a womanising man-child – but each plays their part with expert comic delivery and timing, making a relatively one-note premise fresh and, more importantly, very funny.

The set-up is familiar; our heroes are a pair of financially secure white 30-something American males, both of whom have so far avoided growing up or accepting any kind of responsibility. Danny (Rudd) recognises this, but after his lawyer girlfriend Beth, played by the always-charming Elizabeth Banks, rejects his hasty marriage proposal, he reacts by getting smashed out of his face on the energy drink, ‘Minotaur’, that he and Wheeler (Scott) promote to school kids and finally drives their promotional jeep into a school statue, almost killing an old lady in the process. Danny and Wheeler find themselves under arrest and faced with a choice – go to prison or serve 150 hours with the children’s mentoring programme Sturdy Wings. They take the latter option and are charged with positively influencing Auggie (Superbad’s Christopher Mintz-Plasse), a loner who spends most of his time in orks and wizards fantasy roleplaying, and Ronnie (Bobb’e J. Thompson), an unbelievably foul-mouthed 10-year old with a breast obsession.

This is an obviously contrived plot, but the script, co-written by Rudd, director David Wain, support actor Ken Marino and writer Tim Dowling, is packed with great jokes even in these introductory scenes. The first few scenes roll out the expected sex-oriented gags, but then comes a scene that establishes the fractures in Danny and Beth’s relationship, and it focuses on more intelligent, word-based humour. The couple are in a Starbucks-esque cafe and Danny becomes incredulous at the server’s insistence on using Italian terms for the drink sizes, leading to an increasingly heated discussion on the meaning of “venti”. It’s hilarious and relatively sophisticated humour, establishing a welcome level of subtlety to the film. Of course, Role Models also brims with boob jokes, but there is a persistent wit beneath the childishness.

It also has immense quality in it supporting cast, not least from Jane Lynch (Best in Show, 40 Year Old Virgin) whose turn as the ex-junkie heading up Sturdy Wings almost steals the movie. Her character mixes metaphors to the point of incoherence, yet always remains fully convinced of the clarity of her meaning, leading to some of the funniest exchanges in the film. Christopher Mintz-Plasse’s Auggie is also excellent, initially seeming like a re-run of Superbad’s McLovin but developing through the film into a believably put-upon character, evoking sympathy and sadness in the film’s few serious moments.

Role Models is not a well-structured film, with some glaring plot holes and a very predictable story, but the laugh count is so high that this is never a hindrance to its enjoyment.