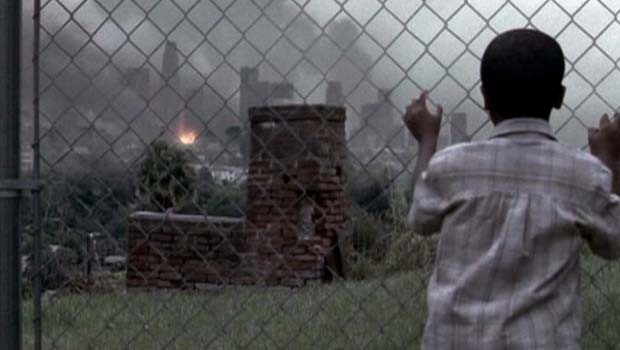 Right At Your Door Review

Summary: Ultimately a small and depressing film, played out as a two hander between two less than sympathetic characters about whom it is, frankly, difficult to care much of the time.

Newly-ish weds Brad (Cochrane) and Lexi (McCormack) have just moved into their new home in Los Angeles; they haven’t finished unpacking. But Lexi has to go to work; Brad is a musician, so has nothing to do. This is clearly the source of some tension between them. Brad kisses her goodbye, watches her drive away, and goes back into the house, potters, makes coffee, the usual morning routine. And then the bombs go off.

Brad’s instant reaction is to get to Lexi. Panicking and jittery, he leaps into his car, heads in the city, despite the warnings to stay put. He soon realises that he isn’t going to get anywhere, and returns home, stopping only to pick up supplies. These are dirty bombs, and citizens are being advised to barricade themselves in and seal all the windows and doors. With the help of the neighbour’s Mexican handyman (Perez), Brad seals himself in. He still hasn’t been able to get hold of Lexi.

And then she reappears.

The premise of Right At Your Door is an interesting one, and it has some clever and pointed things to say about our culture – for instance, on hearing the news, Brad’s first reaction is to switch on the television instead of looking out of the window. But ultimately its quite unsatisfying, because as ‘a reaction to the psychological limitations of our Post 9/11 society’ (Chris Gorak, writer-director), its psychologically very limited itself. This is probably due in part to budgetary restrictions, but instead of Gorak, a first time director and former art director, opening the story up, he narrows it further and further until the focus is Brad and Lexi sweating and looking ill against a grey, ashy, bedraggled LA. It feels very small, like a student film or a play, where it ought to be bigger.

The much-advertised twist came less as a body blow and more as an unpleasant jolt, like when the floor of a lift drops away from under your feet. But it also seemed unbelievable; a twist for the sake of a twist. Both Brad and Lexi are often thoroughly unsympathetic, which is fair enough, as they are pretty stressed, but its often difficult to empathise with them. Brad is enough of a snob that he never introduces himself to the Mexican handyman, who addresses him as ‘sir’ even though they may be the last two people alive.

On the other hand, finally a good use for all that plastic.

Right At Your Door is ultimately a small and depressing film, played out as a two hander between two less than sympathetic characters about whom it is, frankly, difficult to care much of the time. They might be realistic, but they’re also not very interesting, and in the end I was left under-whelmed and disengaged.