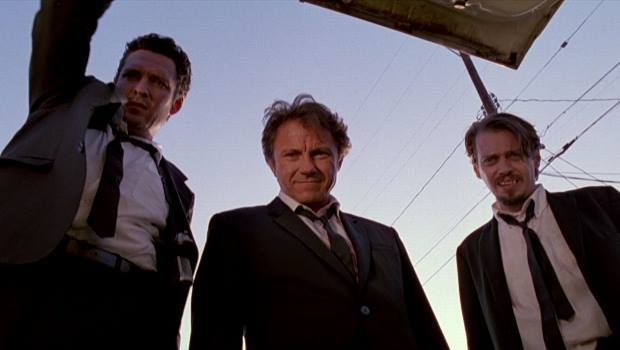 Summary: With razor-slice dialogue that thrilled the ears even while it lopped them off, a 70s soundtrack to kill for and some great performances from all involved.

I met Tarantino once, in Amsterdam. He looked terrible. Critically kicked for a recent acting role, unshaven, pie-eyed and porky, he declined to pose for a photo. But I was permitted to “shake my hand, man,” which was impossibly cool. Even as he twitched and then shuffled round the corner, I knew I’d pressed skin with a legend, one that essentially began with Reservoir Dogs. Forget the bloated Kill Bills, this was the Cannes jury head as a lean, hungry first-time director.

A heist movie without the heist, Dogs was incredibly economical, squeezing its $1million budget through the fragmented flashbacks of a job gone wrong and the recriminations of a gang as they bark all day and occasionally bite.

With razor-slice dialogue that thrilled the ears even while it lopped them off, a 70s soundtrack to kill for and some great performances from all involved, Steve Buscemi’s weasly Mr Pink and Michael Madsen’s psychotic Mr Blonde especially, the film’s influence made it one of the most important of the 90s. The scant extras provided here are thus a little disappointing, with DVD the perfect format for such an endlessly quotable film, but Tarantino’s introduction is worth a hundred of the usual disc gimmicks.