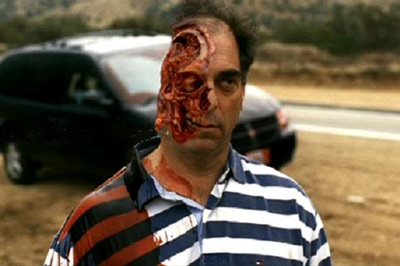 Like Hostel before it, Reeker proudly boasts that this is the movie to put the fun back into horror and claw the genre away from sanitised Hollywood efforts like The Fog and House of Wax remakes. It’s all nonsense of course – Reeker is unlikely to trouble even the most jittery of moviegoers. Why, the bland House of Wax was better than this, and that’s not exactly a line you can wheel out very often.

Five students are driving across the open expanses of America when their car breaks down at an apparently deserted diner near Roswell. As they sit to wait it out they get a strange feeling that they’re not alone. They become suspicious when they run into a creepy trucker (Michael Ironside in prime grizzled mode) searching for his wife. It’s not long before the kids are being plagued by disturbing visions of dead people and find that they’re in the company of a supernatural killer – the title comes from the fact that this sinister character ‘reeks’ of death apparently.

Director Dave Payne (Addams Family Reunion) might have set out to make Reeker “scary, smart and funny” but he’s hampered by a fatal flaw – he doesn’t know how to make a horror film. The pacing is all over the place and the camera barely deviates from shooting the action in static mid-shot, leaving little in the way of tension as the deeply irritating cast are picked off one by one. Where’s the gore? Where’s the sense of dread, terror or hopelessness? The film tries to make up for this fatal lack of horror substance with a ready stash of one-liners and tongue-in-cheek set pieces. Admittedly these scenes are sometimes amusing, but again the timing is all wrong and it just serves to dissipate the tension even further.

Reeker lacks the nasty ‘70s-style atmosphere of many recent horrors and is perhaps more reminiscent of James Mangold’s Identity (right down to ridiculous twist ending) or the Final Destination movies, though it lacks those films’ sense of over-the-top fun. But Reeker’s terminal problem is that it’s graced by one of the feeblest movie villains since the Wishmaster movies. Anyone left with nightmares after witnessing this pathetic flickering graphic with a drill hand obviously wasn’t watching enough scary movies at a young age.

There are two half-decent moments in Reeker – an acceptable opener that creates a vague level of intrigue and an amusing moment when a legless guy crawls out of a trash can. But ultimately the film is hopeless on every level. The recent The Hills Have Eyes remake proved that you can make a horror film with a sense of fun, while Wolf Creek demonstrated how to make a horror film fuelled by unease and dread. All Reeker serves to show is how to make a horror movie that’s both tame and lifeless, and we’ve had enough examples of that already. Disappointing.