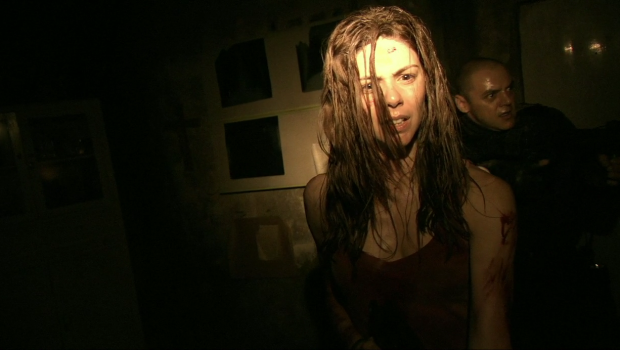 Summary: Balaguéro and Plaza have once again delivered an inventive twist on the genre.

Spanish shocker [Rec] was one of the horror highlights of recent years, and certainly the best in the current cycle of shaky-cam frighteners. Thankfully, Jaume Balaguéro and Paco Plaza don’t simply attempt to repeat the same trick the second time around. Drawing from a different set of genre influences, [Rec 2] is an inventive and surprising sequel, even if it can’t quite live up to its predecessor.

Picking up where the original left off, the film sees a swaggering SWAT team venturing into the sealed-off apartment building to search for survivors and contain the threat. Once there, they find the situation is far crazier than they anticipated as they’re confronted with ceiling-crawling zombie children and unstoppable Satanic forces.

Events during the first half of the movie are filtered through the helmet cameras of these soldiers (sometimes in split screen mode) as they edge around the corridors and darkened rooms of the Barcelona block. As we watch the team proceed – guns held in front of them, ready to blast away at zombies lurching from shadowy corners – the film comes to resemble a first person shooter videogame. That isn’t actually a criticism though. Like the best survival horror games, this is tense, exciting stuff, and the directors are canny enough to switch to events elsewhere before things become repetitive.

Around the halfway mark, the film introduces a trio of teenagers who foolishly decide to sneak into the building to film what’s going on. Naturally, they’re horrified at what they find – and the snipers positioned outside prove almost as lethal as the undead hordes…

Balaguéro and Plaza smartly take the setting and themes from the first film and add to it, opening up unseen areas of the apartment (hidden rooms, crawlspaces, underground sewers) and expanding on the mythology. While there are plenty of nods to Romero (especially one shot of zombies clawing through a bathroom door), the directing duo also draw on Aliens (another horror sequel which cleverly expanded on a masterful original) and The Exorcist. Some fans of the original may not like the way the movie ramps up the supernatural elements, but it allows the filmmakers to offer up a fresh reserve of scare tactics.

What the sequel lacks is the original’s strong, sympathetic central protagonist. Manuela Velaso’s anchorwoman does actually make a brief reappearance here, but for the majority of the running time the action is squarely focused on the interchangeable soldiers, a sullen priest and the faintly irritating teens. This multi-character approach does add variety, but it’s a shame everyone’s so one-dimensional. And like the original, you have to seriously suspend your disbelief that anyone would really keep filming in such extreme circumstances.

Mind you, Balaguéro and Plaza keep things moving so fast it almost doesn’t matter. From the slow-building opening scenes to the later night-vision surprises, the tension barely lets up, and the directors manage to squeeze in some terrific set-pieces along the way (zombie confessions! Death by rocket!).

Unlike many lesser horror movies they manage to maintain the scares without the use of any non-diegetic music. In contrast to recent fear flicks Shelter and The Descent Part II, which were far too reliant on the soundtrack for their shocks, the only background sounds you get here are the whir of the camera or the low roar of overhead helicopters. The make-up and effects work also impress; presumably CGI was used in some sequences, but it’s so subtle you’d be hard-pushed to notice.

[Rec 2] isn’t perfect, but in an era of by-rote walking dead atrocities, Balaguéro and Plaza have once again delivered an inventive twist on the genre. Let’s hope they manage to pull off a third instalment…