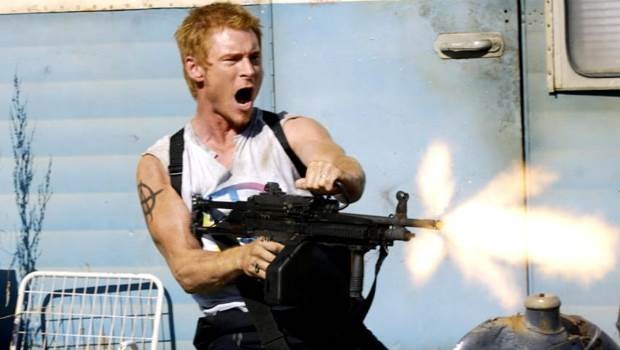 Summary: My problem with Postal is not that it’s offensive, it’s just not as funny or clever as it needs to be.

Postal opens with a genuinely funny scene, with two Islamic fundamentalist suicide bombers looking forward to heaven and their promised allocation of virgins. Only – how many virgins are they going to get? An argument breaks out, which can only be resolved by a call to the big man himself – Osama Bin Laden – who confirms that, due to the increase in suicide bombers, there’s a shortage of virgins…

Our nameless hero (Ward) is having a very bad day; his morbidly obese wife is cheating on him with their disgusting, smelly hillbilly landlord and he’s just had the most bizarre job interview ever. In desperation he goes to see his Uncle Dave (Foley), a con artist who has now turned to running his own Doomsday Cult – though its less about religion and more about Dave having access to all the nubile girls who join up. Dave hasn’t been paying his taxes – why would you when the world is about to end – and the compound is in danger of being shut down. Anyway, the two hatch an elaborate and decidedly dodgy (aren’t they always) get-rich-quick scheme that falls foul of Osama Bin Laden and the Taliban when both groups target a consignment of Austen Power’s star Verne Kroyer’s ‘Krotchy’ dolls, which are being launched at nearby Little Germany, a sort of Teutonic, proto fascist theme park on the edge of town. The dolls are extremely rare and valuable – Dave plans to sell them on EBay, while Osama has rather more dastardly plans…

If this sounds slightly preposterous to you, oh believe me it is., and sadly after the amusing opening it rapidly runs out of steam. German director Uwe Boll is a maverick; entirely self-financed and working outside normal distribution channels, which you have to admire, it’s just a shame he doesn’t pick better material. Boll has won a reputation for himself by delighting in offending critics and audiences alike, and there is something to be said for individual vision in an industry that increasingly seems to be run by accountants who care for nothing but the bottom line. But, and it’s a big but, satire needs to be a lot sharper than this.

Postal, which is based on an ultra-violent video game (never a great start for a film), sets up some very easy targets for itself – Bush, Bin Laden, fundamentalism, both Christian and Muslim – this should be like shooting fish in a barrel – and still misses. The tone is too inconsistent, it sags in the middle, and it can’t resist the opportunity to feature scantily clad girls and stupid shoot-‘em-ups when it could be so much more interesting. Filming a parody of the plane crashes of 9/11 is obviously going to cause offence to the families and friends of the dead – United 93 was too much for a lot of them – but actually its important to tell these stories and tell them from a number of perspectives. My problem with Postal is not that it’s offensive, it’s just not as funny or clever as it needs to be. Watch South Park reruns instead.