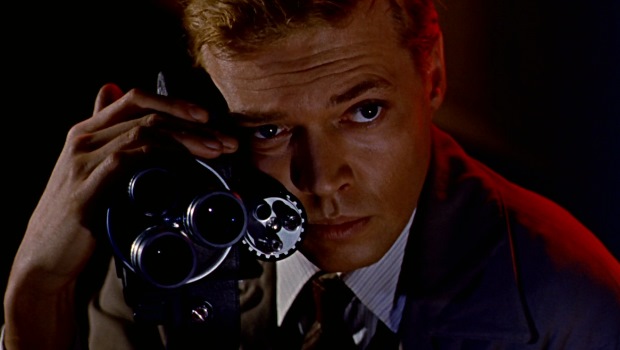 Universally reviled by critics on its release in 1960, the film that destroyed director Michael Powell’s career has experienced something of a reappraisal in the 50 years that have passed since then; so much so that it’s received the 50th anniversary digital restoration treatment and is getting a nationwide cinema release this week, followed by a debut appearance on blu-ray, featuring all the extras from the 2007 Special Edition dvd.

Watching Peeping Tom in 2010, it’s not difficult to understand why the film caused such uproar on its original release, but it is also clear that the voices of condemnation were wrong. The film is an incredibly perceptive work, exceptionally well-crafted, both technically and thematically, and still shocking and disturbing today. It’s not an easy film to watch, and perhaps not one that many people will want to add to their collection, but it is still essential viewing for anyone interested in the unique power of cinema.

In an opening scene that takes no prisoners and sets out Powell’s intentions very clearly, we see the main character Mark (Carl Boehm) picking up a prostitute in a shady London street, going home with her and then murdering her in cold blood. We know that this is a premeditated act, as Mark is filming the whole thing; we see it all unfold through the viewfinder of his handheld cine-camera. Powell gives us no choice but to identify with the killer, and in so doing forces us to acknowledge our compulsion to watch what we are presented with, even as it repulses us.

We soon learn that by day Mark is a quietly-spoken camera operator in a large film studio, and he makes extra money taking pornographic photos in the evenings, for a local newsagent to sell under the counter. He seems completely alone in the world, but we get an insight into his profoundly disturbed worldview through the attempts of his neighbour Helen (Anna Massey) to get to know him. Mark is taken with Helen, and allows her into his life, inviting her to see the cavernous studio where he spends hours developing and watching his films, but being careful not to give away the extremes of his murderous lifestyle.

Powell’s willingness to look so unflinchingly at the dark side of films and the act of filmmaking (for surely that’s what this is all about) is quite incredible. It is as if he was thinking about the joyous cinematic magic he had previously worked (in The Red Shoes and A Matter of Life and Death, for example), and felt compelled to portray the uncomfortable flipside. Every element in Peeping Tom points to a damaging, dehumanising tendency at the heart of movies, from the foregrounding of pornography to Mark’s distressingly sensual relationship with his camera – the only physical contact he seems comfortable with – to the way in which the camera is involved in Mark’s murders.

The ironic thing about this films vilification in 1960 is that it happened at the same time that another very similarly-themed film – Alfred Hitchcock’s Psycho – was playing to packed houses on a nightly basis. While Hitchcock’s masterpiece is unquestionably the more mainstream and formally groundbreaking of the two films, it’s arguable that Peeping Tom is the more thematically profound and insightful work. Just don’t expect to feel good after watching it.