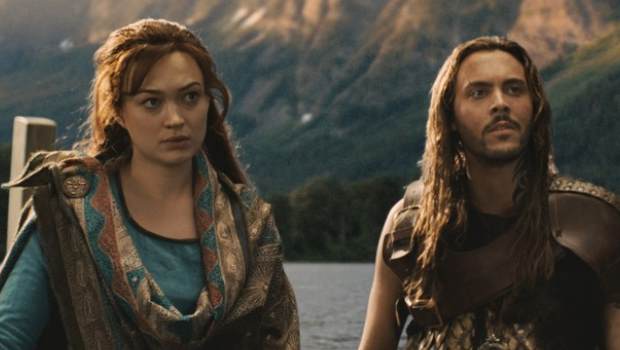 Summary: Fails to capitalise on its outlandish premise.

Vikings vs Predator? Sounds like boneheaded fun doesn’t it?

But Outlander fails to capitalise on its outlandish premise and what could have been a ridiculous, high-concept action romp fails to entertain. Throughout its tediously strung out 115 minutes, this film never stops feeling like it’s been ‘inspired’ by countless better movies.

When spaceman Kainan (Jim Caviezel) crash-lands in Norway 709AD, his futuristic technology fails to prevent him being captured by Norse warrior Wulfric (Jack Huston), who drags the ‘Outlander’ to his tribal village. Led by the venerable king Rothgar (John Hurt), whose feisty, sword-wielding daughter Freya (Sophia Myles) is sent to tend to Kainan’s wounds, the villagers are initially suspicious of the exotically attired stranger in their midst.

Yet when Vikings start to die horrible, mysterious deaths, Kainan realises he’s brought a passenger along on his voyage – a Moorwen, a giant monster with an insatiable appetite for human flesh. With the beast wreaking havoc, the Outlander unties Rothgar’s tribe with that of his rival Gunnar (an underused Ron Perlman) to entrap their extra-terrestrial foe. Nevertheless, it escapes and Kainan and Wulfric pursue it to its lair.

A capable actor, Caviezel simply grits his teeth here and slashes his way through the motions of writer-director Howard McCain’s laboured plot, which takes forever establishing the obligatory romance between Kainan and Freya and setting up the initial confrontation with the Moorwen. The monster itself is a pretty indistinct lump of alien and the CGI effects vary wildly in quality, suggesting sudden budget shortfalls. One sequence in which Kainan dispatches an unfortunate bear is shot in ridiculously extreme close-up and darkness.