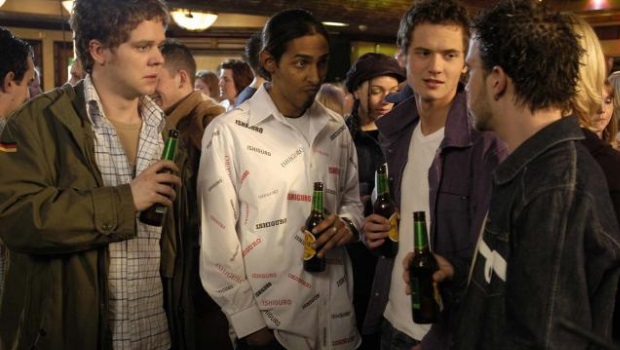 The arrival of any British film, let alone a lo-budget flick set in Basildon, fills this critic’s heart with trepidation. Sadly, though I would love to live in a country with a vibrant, thriving film industry, my reaction to most British films of the last ten years has been ‘what fresh hell is this?’ and I’m sorry to say that, far from spearheading the much vaunted renaissance of British film, New Town Original is more like a stake through its heart. At least it doesn’t star Julian Sands…

Mick is a typical twenty something Essex boy, clerking in the Accounts Department of a local business, living in a boxy flat, and hanging out in the bars and clubs of Basildon at weekends with his little gang. Unassuming and sensitive, Mick is struggling with depression and panic attacks and that ‘is this is?’ feeling of ennui. He goes to his family doctor who doesn’t seem to remember him and scribbles him a script for Prozac without taking a history or discussing the possibility of side effects (get that doctor struck off, Mick!) Mick starts taking the pills, doesn’t discuss it with anyone and a few days later heads out with the lads for a night drinking and eyeing up the ladies.

In a nightclub he runs into Nicki, a girl he knows from around (Basildon is clearly that sort of town) who makes it pretty obvious that she fancies him. Though the feeling is mutual, Mick is wary of any relationship with Nicki – his best friend Johnno has warned him that Nicki is seeing the local nutter and hard case, Si Naylor. Nicki reassures him that she and Si are just mates, and they leave the club together. When Johnno finds out, he’s concerned, and warns Mick to stay at home and keep a low profile – Si is on the warpath. Mick is terrified – his paranoia fuelled by Johnno’s words and the effects of the prozac. But when he finds out that Johnno has been badly beaten by Si, he decides to confront him, once and for all.

There are hints of a brain behind the story of New Town Original; attempts at misdirection and plot twists. But sadly the film is terrible. It looks terrible, it sounds terrible, and it’s acted terribly. It’s like a bad episode of Casualty; a film made by someone who has never watched a film, only heard about films from a blind person. It’s not even funny bad, it’s just boring- at 88 minutes, it ought to zip by, but it drags on interminably. When Mick sets off in his car to drive somewhere, we quite literally see him driving there. We’re not in the car with him, watching him make a call or do anything, we’re at various roadsides as his car goes past. In another scene, we watch someone fry onions for a good thirty seconds. The pacing – or lack of it – sucks any life out of the story.

Then there’s the script. I am all for realism in scripts, and well aware that people don’t talk like the kids in Dawson’s Creek – there’s no doubting that the writer knows how people from Essex speak. However, when whole conversations consist of people saying ‘Alright?’ ‘Yeah, okay. You alright?’ ‘Yeah.’ I wanted to scream. Dialogue in film scripts is not filler – it exists to move the story along. I wanted to post a copy of Robert McKee’s Story to these ‘filmmakers’. After all the set up, the reveal/twist is so underplayed as to make no sense – there are no consequences to anybody’s actions.

The less said about the acting the better – Elliott Jordan is kind of pretty but he has a worryingly long neck and only two expressions – vacant smile, or slack-jawed confusion; Katharine Peachey isn’t bad, and at least her character has a bit of attitude.

There’s lots more I could say about New Town Original – the hackneyed use of symbolism, the ridiculous inconsistencies of the paper-thin plot – but none of it would be good so I think I’ll just draw a line under it. The filmmakers are to be applauded for their efforts and the fact that they have managed to finance and produce a feature length movie, which is no small achievement – its just a pity that this is the final result.

Aka: This is Essex- New Town Original
“The film has been rebranded from its original title, New Town Original, to cash in on the recent interest in Essex following the popularity of docu-soap the Only Way is Essex.”
Eco News