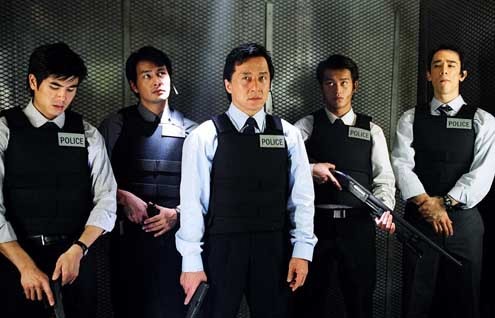 Summary: Clichéd and often ludicrously sentimental, this still isn't anywhere near as bad as some of Chan’s Hollywood endeavours.

Back in the 1980s Jackie Chan was the undisputed master of martial arts cinema. Films such as Project A, The Armour of God and Wheels on Meals may have been scrappy around the edges, but they were infused with a joyful combination of slapstick comedy and breath-stealing stunts (usually choreographed and performed by Chan himself, and often resulting in a broken bone or two).

The Police Story movies were one of his biggest successes, and like many Hong Kong actors and directors who have been rather ill-served by their adventures in Hollywood (Chow Yun-Fat, Jet Li, Ringo Lam) Chan has now returned to his roots for another instalment in the series (although now playing what appears to be an entirely different character).

The problem with New Police Story isn’t that Jackie Chan is too old for this kind of thing. He may be over 50, but as he demonstrates in a succession of lightning-quick scenes he’s still more than able of holding his own in hand-to-hand combat. Though to be fair the movie isn’t quite so confident of Chan’s abilities, writer Alan Yeun seeing fit to pair the flash-fisted legend with a young upstart (played by Gen-X Cops’ Nicholas Tse) for much of the on-screen action.

No, the main downfall of New Police Story is that audiences are a lot less tolerant of witnessing an irony-free succession of cop movie clichés than they were in the 80s. It’s part of the reason that we still have fond memories of the original Lethal Weapon and Beverly Hills Cop movies, while their later sequels look so tired. And make no mistake – New Police Story leaves no cop movie cliché unearthered. You want the take-no-shit boss? You got it. You want a ‘red wire or green wire’ scene? You got it. You want footage of the good cop drowning his sorrows over a mission gone wrong? Well, you get the picture.

To be fair New Police Story does try and bring itself up to date with a cartoonish plot involving a bunch of extreme sport fans who stage huge robberies and then off coppers like it’s one of their favourite computer games. But the scenes of skateboarding dudes or computer gaming are just embarrassing, like your dad dressing up in baggy jeans and boogieing on down at your local nightclub.

This is also a surprisingly nasty film, with minor characters (especially cops) killed in a variety of pointlessly violent ways that seems rather at odds with the genial nature of the comic scenes. The press notes state that the film lays claim to the “highest number of (fictional) police officers injured and sacrificed during its course.” If that’s a statistic that impresses you, then New Police Story could be the film for you.

Inevitably the movie does feature some great stunts, albeit not as many as you’d expect from a Jackie Chan movie. Hong Kong, with its shimmering neon, skyscrapers and complex escalator system, is still the perfect backdrop for these kind of movies, and some fantastic rooftop action scenes show off the city in all its glory. Part of the appeal of martial arts movies is coming up with new and inventive ways for the fight scenes to unfold, and for your buck you get a fun runaway double-decker bus scene and a reasonably involving battle in a kids’ play area.

But despite the inflated budget, New Police Story mostly comes across as about ten years out of date. Clichéd and often ludicrously sentimental, this still isn’t anywhere near as bad as some of Chan’s Hollywood endeavours (The Tuxedo anyone?). Yet it does suggest that this relentlessly amiable actor may be in need of a few new ideas if he wants to continue making movies.