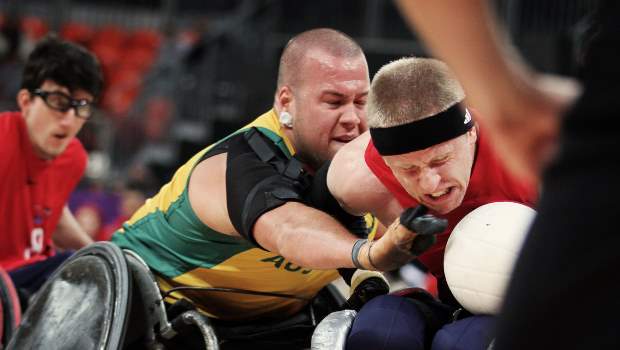 Summary: Murderball has Best Documentary written all over it, and deservedly - clever, funny, provocative.

Murderball is a really odd name for a film. It sounds like a futuristic thriller in which hapless contestants are forced to take part in a deadly game of dodgeball, starring Arnold Schwarzenegger or that slightly stupid looking bloke from American Pie. The tall one who used to go out with Katie Holmes. But anyway, the point is that Murderball is none of these things, nor thankfully anything to do with Katie Holmes. It’s a documentary, in the best tradition, fitting perfectly into the school of modern documentaries like Etre et Avoir, Spellbound, and Touching The Void – showing that truth is both stranger and far more interesting than formulaic fiction.

Murderball is set in the thrilling world of Quad Rugby, a full contact sport played by quadriplecs in armoured wheelchairs – a sort of mixture of basketball, rugby, and dodgems. The action starts at the 2002 World Championships in Sweden, where Team USA, the number one seeds, are confidently looking forward to another victory. Their main rivals are Canada, coached by Joe Soares, a former American star player who, when dropped from the US team, went north to coach (possibly out of sheer spite). When Canada wins by one point, Joe is triumphant – Team USA humbled and shocked.

Joe is a fascinating jumble of emotion. From an immigrant family, crippled by childhood polio, he is fiercely ambitious and competitive – something his sensitive 12-year-old son Robert, a quiet, studious and deeply unsporty boy, struggles to come to terms with. In the early scenes, Robert is a silent onlooker, while Joe clearly has far more fun with his jock buddies. Robert’s longing for his father’s love is exemplified in one scene where he dusts his dad’s trophies, poor little match boy! Joe can’t see any merit in great attendance records, musical ability and good grades – he wants his son to be a sports star.

Joe’s biggest rival on Team USA is their spokesman Mark Zupan, the other key protagonist of the film. Zupan is equally strong-willed, cocky, tough and aggressive, but also funny and oddly sexy. A star football player (I mean proper football, not that American game) at school, Zupan was injured in a freak drink driving accident caused by his best friend, and has come through suicidal rage to become a focused competitor and leader of the team. We see Zupan’s daily routine, getting ready for a game, hanging out with the other players, and with his very pretty girlfriend, a goth and former mortuary attendant. Team USA are a very much a typical group of extreme sports types – the kind you meet in bars from Aspen to Chamonix. Murderball shows how playing quad rugby has given these men a sense of their masculinity. The world perceives them as fragile, delicate. Smashing into each other at speed assures them that they are not. (And so does bragging about their sexual conquests, which is both hilarious and eye-opening.)

It’s a great story, well told, deeply moving and excitingly filmed, all low angles and cameras strapped to hurtling chairs. If it all sounds a bit too triumph-of-the-human-spirit, well, the film-makers also tell the story of Keith, a seventeen year old former motocross racer and stunt rider, who is still in rehab. On his first day in his newly converted bedroom, Keith tiredly tells his mother and girlfriend that it sucks. They’re hurt, thinking he’s talking about the décor, but he means being in a wheelchair, and they can’t argue. Later, he sits quietly in his chair, staring at the bike that broke his neck. Meeting Zupan, who with other members of the quad rugby team visits rehab centres, is like a lightbulb going off in Keith’s head. He can’t take his eyes off Zupan’s armoured chair. Plays with it. Begs to try it out. For the first time, he can see some possibility in this new life.

The film culminates at Athens 2004, and, without giving away the result, it’s a moment of triumph for all the players in very different ways. Murderball has Best Documentary written all over it, and deservedly – clever, funny, provocative. Hurrah.