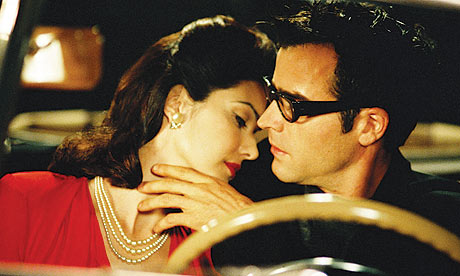 Summary: Lynch’s ability to craft brilliantly memorable scenes has never been more evident than it is here, and he masterfully dovetails every detail of the production.

At the end of 2009, when it came time for the opinionaters of the world to offer their verdicts on the best movies of the previous 10 years, David Lynch’s 2001 offering Mulholland Drive was one of those titles that kept appearing at or very near the top of those lists. Watching it again for the first time since its cinema release, I didn’t find it hard to see why so many critics were keen to pull it back into the limelight. It’s a stunning film that succeeds on multiple levels, being simultaneously a darkly comic Hollywood satire, a deeply disturbing trip into a woman’s troubled mind and a hugely compelling riddle in film form. It’s ambitious, puzzling and deftly cinematic, and it allowed Lynch to showcase Naomi Watts, arguably one of the best actresses currently working, to amazing effect as Betty/Diane, the two sides of Mulholland Drive’s split personality.

As this lovingly presented blu-ray’s fascinating extras make clear, the fact that Mulholland Drive ended up as such an enduring work is really down to luck, both good and bad. Originally conceived in the early 90s by Lynch and his Twin Peaks co-creator Mark Frost, the bulk of Mulholland Drive was shot in 1999, without Frost’s involvement, as a US pilot for a doomed ABC TV series. It was never broadcast, but the project stayed alive in Lynch’s mind.

18 months later French producer Alain Sarde’s company made it possible for Lynch to get the cast back together and shoot an entirely new ‘third act’ for what would now be a stand-alone film. It could have been a recipe for disaster, but on one of this disc’s interviews Lynch admits that he now looks at the success of the finished film and wishes he could “trick himself” into such an unexpectedly productive creative process again.

The story of its creation goes a long way to explaining the film’s multiplicity of seemingly unrelated characters and its odd structure, which, on a first viewing, is thoroughly bamboozling. But it also gives one an even greater respect for Lynch’s brilliance: his particular achievement with Mulholland Drive is to gather these sprawling elements together into a thoroughly satisfying film experience, one that – ironically, given its TV roots – seems to capture the very essence of cinematic creativity.

Lynch’s refusal to pin his enigmatic characters to a conventional A to Z narrative leaves the film open to endless interpretation, but it also means that each scene has as much significance on its own as it does as part of the overall story. Lynch’s ability to craft brilliantly memorable scenes has never been more evident than it is here, and he masterfully dovetails every detail of the production, from each individual actor’s performance to Peter Deming’s precise camerawork to Angelo Badalamenti’s Twin Peaks-esque score, to give each scene a unique atmosphere of its own that still somehow makes sense in the wider context. It goes without saying that Mulholland Drive is a masterpiece.

As previously mentioned, this blu-ray edition, part of Optimum’s excellent series of reissues from French company Studio Canal, has a better set of extras than any previous edition of the film. The best all-new feature is ‘In The Blue Box’, in which a handful of French directors and film critics (plus Donnie Darko director Richard Kelly) get into the meat of Lynch’s craft in Mulholland Drive, discussing individual scenes and thematic elements. As one of them puts it, “[Lynch’s] films contribute to the fight against simplification, against a trend of unambiguous films which provide answers the way television news does”. In light of that statement, ‘Back to Mulholland Drive’, another new feature – unauthorized by the director – that seeks to explain what is actually happening from moment to moment in the film, seems to work against the essential mystery at the heart of all Lynch’s work, and is probably best avoided.