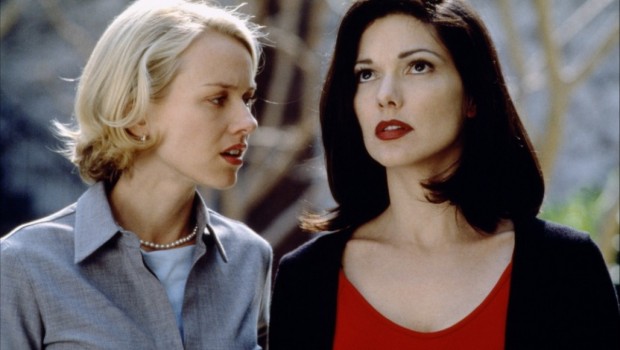 Summary: Dark, funny and original, this is one of Lynch’s finest works. Just don’t expect any kind of neat resolution.

Mulholland Drive opens with jaunty couples dancing the jitterbug against a white background. The tone is toe-tappingly upbeat, joyful and optimistic. Gradually the music becomes distorted and ominous flickering faces envelop the screen.

This opener sets the scene perfectly for what will follow. Like most of Lynch’s other pictures, this is a movie in which the tone can quickly change from hilarious (a bungling hitman leaving a trail of bodies) to deeply disturbing (the scene with Dan describing his dream in a cafe is one of the most unsettling movie sequences in the last ten years).

In many ways Mulholland Drive can be seen as a direct continuation of the narrative fragmentation that Lynch experimented with in Lost Highway and would take even further with Inland Empire. The first two thirds of the movie unfold in a linear fashion (although it isn’t clear how the dangling plot threads will come together) before the final third sees characters switch bodies and tiny people escape from a blue cube. Lynch takes delight in jumbling narrative conventions like this – you are still able to piece the elements of the plot back together, but you need to work a little harder to do so.

The movie was originally conceived as a TV pilot, but expanded to a feature film once ABC decided not to commission a series. But in many ways Mulholland Drive is Lynch at his most cinematic – the central scene at Club Silencio is a particularly arresting fusion of stagebound figures, haunting music and Lynch’s beloved red curtains.

This is also Lynch’s movie about movies, or at least about Hollywood, and Mulholland Drive explores both the hypnotic glamour of Tinsel Town and its dark, depressing underbelly. In fact, it’s a film that is crammed with references to the history of cinema from Rita taking her name from a Rita Hayworth poster to screen veteran Ann Miller’s appearance as Betty’s landlady. Lynch has fun using this setting to play around with ideas of artifice, whether it’s Betty reading lines from a script in wildly different ways or the passionate performers at Club Silencio unexpectedly revealing themselves to be miming.

The two actresses at the centre of Mulholland Drive are required to travel through wildly changing emotional states, and they lend this very self-aware movie a little humanity. Watts (in the role that made her a star) goes from naïve and cheerful to suicidal despair, while Harring’s confused and frightened character gives way to a sexy, manipulative starlet, and both actresses excel. But, as with much of Lynch’s work, much of the appeal lies in the deadpan supporting performances, from Achy Breaky Heart-crooner Billy Ray Cyrus as a pool cleaner to Angelo Badalamenti’s coffee-spitting Mafioso.

What does it all mean? Mulholland Drive is a complex movie that could probably warrant several large tomes of critical analysis. But it’s best to just sit and back and enjoy this ride down another one of Lynch’s lost highways.

Lynch, of course, doesn’t do commentaries, preferring audiences to figure out the meaning of his movies himself, and it’s no surprise that there aren’t any in-depth documentaries on the film either. As such this Special Edition is probably the best that we can hope for.

You get a succession of interview which include Lynch on typically vague form, Theroux mumbling “you know” a lot and Harring waxing lyrical about Lynch’s genius. Best of the bunch is Lynch’s regular composer Angelo Badalamenti, who gives a fascinating insight into his working relationship with Lynch and of how the two hooked up together in the first place.

There is also a press conference with the cast and crew. They offer some insight into the making and meaning of the movie, although Lynch’s assertion that “I’ve recently been talking about ideas as fish” is likely to provoke a confused frown.