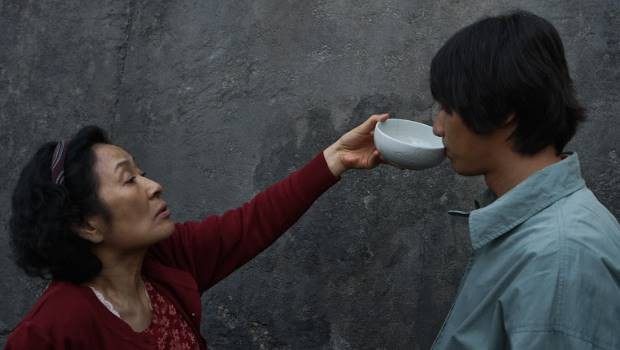 Summary: Bong’s masterful composition and editing creates suspense that Hitch would be proud of.

New to dvd this week from Joon-ho Bong, director of The Host and Memories of Murder, Mother defies pigeonholing, beginning as a compelling murder mystery and transforming into a dark and twisting character study, tinged with surreal dream-logic. Hye-ja Kim gives an amazingly intense and unpredictable performance as the unnamed mother of the title, who sets out to see justice done when her son (Bin Won), who has an unspecified learning disability, is arrested for the bizarre murder of a local schoolgirl. What starts out as a simple tale of a loving mother seeking vindication for her wrongfully-accused son becomes something much more complicated, as Bong slowly gets under the surface of the mother-son relationship while gradually revealing the unsettling lengths the mother is willing to go to to defend her cause.

The title brings Hitchcock’s Psycho to mind, and that may be intentional; Bong’s masterful composition and editing creates suspense that Hitch would be proud of. One brilliant pivotal sequence uses a slowly tracking camera to reveal key information in a way that’s simultaneously chilling and delightful, as great suspense cinema should be. Equally effective is Bong’s use of different points of view as the mother pieces together the truth; the combined impact of his stylish storytelling and Kim’s sensational performance make Mother an unforgettable experience.