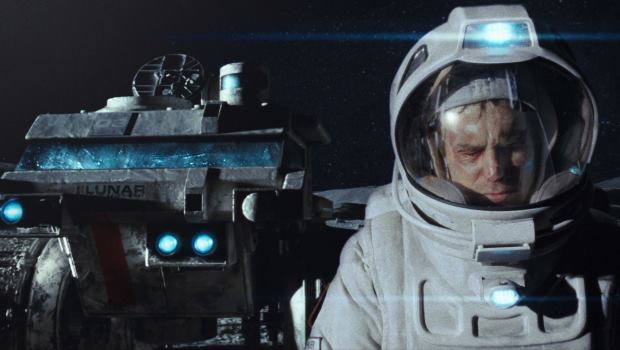 A seriously impressive debut from British director Duncan Jones, Moon recalls thoughtful science fiction classics like Solaris and 2001: A Space Odyssey, yet retains enough imaginative originality to be compelling in its own right.

The mood and pacing subtly convey a creeping paranoia, but it’s not without humour and the bleak lunar landscape is capably realised on a restricted budget.

Sam Bell (Sam Rockwell) is an employee of a mining company that has discovered a clean alternative to fossil fuels on the moon and now supplies 70% of the Earth’s energy needs. Approaching the end of his three year contract, Bell works alone on his base save for GERTY, his robot companion voiced by Kevin Spacey, in soothing tones reminiscent of 2001’s HAL 9000.

Sam distracts himself by tending to plants and tinkering with his model village, taking solace in taped video messages from his wife Tess (Dominique McElliot) and his forthcoming return home. His existence is one of frustrated, stretched out tedium until a vehicle accident at an isolated mining station lands him in the base’s infirmary. He starts suspecting that he may not be alone after all and doubting his own identity, questioning GERTY’s loyalty and his increasingly fragile sanity.

Jones’ direction is low-key, affording Rockwell plenty of space to portray his spaceman orbiting a nervous breakdown, allowing the film’s existential and ethical dimensions to slowly absorb the viewer without ever once feeling didactic. Moon is an elegantly told, enjoyable addition to the intelligent science fiction genre.