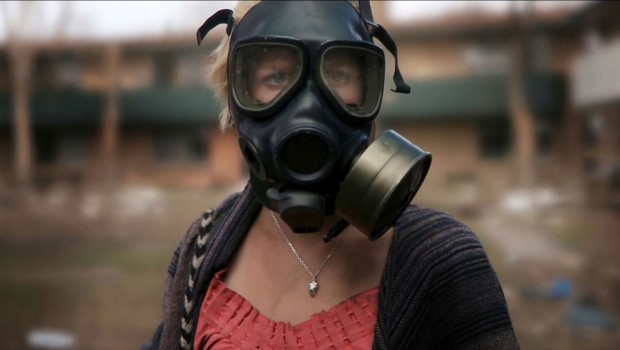 Summary: Writer/director Edwards’ real triumph with the film is his use of subtle visual effects in real-world locations, creating a wholly convincing alternate reality

Released into cinemas at the end of 2010 to glowing reviews and lots of ‘next big thing’ talk, British filmmaker Gareth Edwards’ impressive debut feature failed to prove as big a hit with audiences as with critics, comfortably recouping its small budget at the UK box office, but arguably falling short of the peaks of success that some critics (this one included) may have expected. So the release of Monsters on dvd brings a twofold opportunity; firstly for the film to find a new audience in a more significant way, and secondly for a reappraisal: to ask if the film really is as good as we all thought on first viewing, and whether it stands up to repeat plays.

Monsters takes place in an alternate version of our world where alien life has made its way to earth, and the resulting titular beasts – massive octopus-like creatures hundreds of feet tall – are contained in what used to be Mexico, now known as the ‘infected zone’. This sci-fi scenario is the backdrop to a very simple story – part mismatched romance, part road movie – in which photojournalist Andrew Kaulder (Scoot McNairy) is given the thankless task of escorting his boss’s stranded daughter Sam (Whitney Able) back home to America, preferably avoiding the infected zone en route. Of course, events conspire to force them through the zone, where they face attacks by the monsters, and ultimately discover a surprising truth about these alien creatures.

Writer/director Edwards’ real triumph with the film is his use of subtle visual effects in real-world locations, creating a wholly convincing alternate reality. Happily, this is just as effective on the small screen as it was in cinemas. ‘Subtle’ is the operative word when describing Monsters, as the creatures themselves play very much a supporting role in the film, always in the background apart from in one brilliantly realised attack sequence and at the film’s striking conclusion. Edwards is much more interested in what is happening with his human characters, and the film is possessed of a pensive, atmospheric mood, achieved in no small part thanks to the brooding score from Jon Hopkins, complementing Edwards’ dazzling photography very well.

On the downside, the flimsiness of the characters and story become much clearer on second viewing, and it is evident that the sci-fi scenario is actually much more interesting than the couple leading us through it. The performances are good – McNairy is really convincing – but Edwards doesn’t give them much of consequence to actually say to each other; the development of their relationship feels more like a conventional inevitability than a realistic occurrence.

This is not a major flaw though, especially in the context of what is an otherwise incredible achievement in budget filmmaking; Monsters looks and feels like a major studio film, and Edwards is clearly a talent to watch. The dvd/Blu-ray will also prove incredibly useful to anyone keen to follow in Edwards’ footsteps, as the exhaustive feature-length making-of – covering pre-production, shooting, editing and visual effects – shows in no uncertain terms how they pulled it off, as well as showing how important it is to get the right team in place. Editor Colin Goudie deserves particular praise, as it’s clear from the special features that without his tireless contribution, Edwards would have had a significantly harder time bringing his vision to the screen.