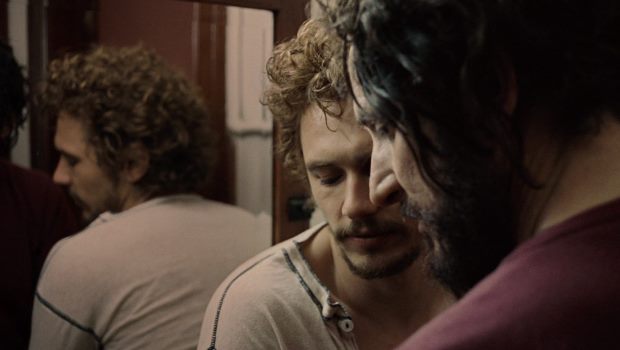 Summary: Milk is a compelling and often moving film that strongly advocates compassion over prejudice.

Sean Penn adds another great performance to his already glowing record as Harvey Milk, the first openly gay man to be elected to public office in American history. Exuding warmth, humour and compassion, not terms generally associated with Penn’s acting, the Oscar-winner’s portrayal here makes it incredibly clear just how this man was able to unite so many voters, from a multiplicity of minority groups, and inspire them to hope for a better life.

Milk is the latest film from director Gus Van Sant, whose output has flitted stylistically from very commercial (Good Will Hunting, Finding Forrester) to arthouse (Last Days, Elephant) to pointless (his notorious shot-for-shot Psycho remake). Here he’s in commercial territory as far as the film’s style is concerned, using the framing device of Harvey narrating an account of his life onto tape in 1978, “only to be played in the event of my death”, as a way of dipping in and out of Milk’s career. But the forthrightness with which Van Sant portrays his gay characters and their relationships ensures that, for mainstream American cinema at least, the film’s content is never conventional.

11 months after his historic election in 1977, Harvey Milk was assassinated by his colleague Dan White, a fact that Van Sant tells us very early on. While this knowledge occasionally lends an air of sadness to events as they unfold, the film is in no way a sombre reflection on Harvey’s life. Penn invests his portrayal with such vibrant positivity in the face of extreme prejudice that the overriding feeling is one of inspiration and celebration. Beginning in 1970 with Harvey turning 40 and realising he has done nothing in his life he can be proud of, Van Sant follows his move from New York to San Francisco as Harvey becomes politically active and, over the next eight years, becomes a figure of significant influence.

Harvey’s various friends and enemies are played by a host of recognisable character actors, but the two that really make an impression are James Franco as Harvey’s boyfriend Scott and Josh Brolin as Dan White. Franco was last seen stealing scenes from Seth Rogen in Pineapple Express, and his performance here is equally impressive, similarly natural and laid-back but tweaked towards drama rather than comedy. Brolin is also excellent in what is arguably the most difficult role in the film. Dan White was an incredibly complex figure, and his love-hate relationship with Harvey is one of the most interesting aspects of the film. It is a credit to Brolin and scripter Dustin Lance Black that White remains a contradictory and confused character, as opposed to being painted as an outright villain.

The script is less successful in uniting Milk’s public and private lives, particularly in scenes that focus on his later boyfriend, played by Diego Luna. This part of the story doesn’t quite fit with everything else that we see about Harvey, and leads to a dramatic crescendo that feels unwarranted. While these scenes are valuable as they stop the film’s portrayal of Harvey from becoming too saint-like, they also pull Van Sant away from the wider political and social aspects of the story, which is where the film’s real weight lies.

Ultimately Milk is a compelling and often moving film that strongly advocates compassion over prejudice. This is a welcome message in a world where the mass media largely encourages judgmental and self-righteous attitudes; Harvey’s cries of hope for the hopeless still need to be heard today.