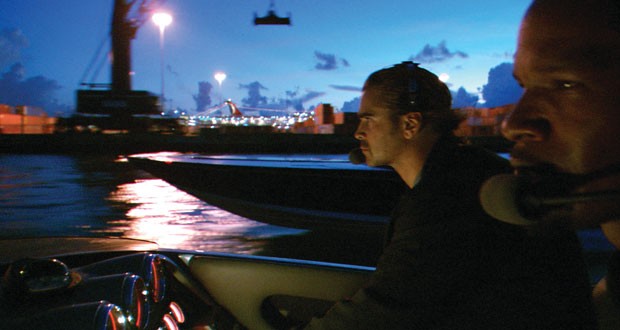 Summary: Don’t be sucked in by the dreamy cityscapes.

It all looked so cool from the trailers. Michael Mann updating his stylish cop show with funky music, trendy stars and documentary-influenced visuals…Surely Miami Vice would be a guaranteed winner?

Alas, no. While Mann’s talent for making city skylines beautiful is unparalleled, his latest movie is a long, empty and largely pointless remake of a show that was perhaps best left swallowed up by the 1980s.

This time Colin Farrell and Jamie Foxx are the tough-talking cops Crockett and Tubbs – the character names being just about the only link to the original TV series. The duo go deep undercover to bust an arms-smuggling ring, a mission which, for the majority of the movie, takes them out of Miami itself and to exotics locations including Cuba, Haiti and Ecuador.

The plot is as simple as any hour-long TV show, but it is made unnecessarily convoluted and difficult to understand by the cast’s tendency to mumble their dialogue. Mann’s script seesaws between the vacuous and pretentious (“You’re like gravity,” Farrell offers up at one point), and while you could level the same accusation at most of Mann’s other movies, the faux-cerebral exchanges feel far more contrived in Miami Vice than in Collateral or Heat.

Considering the film’s minimal characterisation and woeful script, Foxx does well to come away from the movie still seeming really rather cool. But Colin Farrell is hopelessly miscast. His incoherent performance here is worse than in Alexander, while his monstrous ponytail and moustache render any idea that this character is a languorous lady-killer as pure fantasy.

It is Mann who must shoulder most of the blame for the movie’s failure, however. The director overdoes his trademark visuals so much that, at times, it feels like a self-parody of his former work. The film becomes almost skyscraper pornography, with the camera lingering lovingly over skyscrapers in the background like naked flesh – the effect is sometimes hypnotic, but more often ridiculous.

There’s no denying Mann is one of the best action directors operating in Hollywood today, as witnessed in the movie’s breathless final gun battle. Which makes it so bafflingly that the film, for the most part, is so action-light, with the majority of the over-long running time taken up with characters trading empty speeches. No one wanted Miami Vice to turn into Bad Boys, but it might have been a lot easier to forgive this humourless picture if it had been enlivened by a few of Mann’s expert set pieces.

The duo go deep undercover to bust an arms-smuggling ring, a mission which With the possible exception of Mann’s proto-Heat TV pic LA Takedown, this is the director’s worst movie to date.

Two making of featurettes (‘Miami and Beyond: Shooting on Location’ and ‘Miami Vice Undercover’) and ‘In the Air Tonight’ music video by Nonpoint.