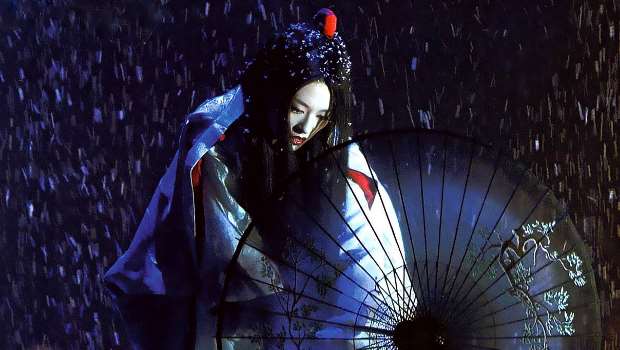 Memoirs of a Geisha Review

Summary: The male roles are one-dimensional in comparison to their female counterparts.

A coquettishly flirtatious, visually lush Cinderella story, Memoirs of a Geisha shimmers with exotic surface beauty, but skimps on historical detail and undermines its emotional impact with frustratingly pat storytelling and ambivalence as to just what it means to be geisha.

Irrespective of controversy surrounding the non-Japanese casting of the three main female roles, with Ziyi Zhang and Gong Li (Chinese) and Michelle Yeoh (Malaysian) chosen, one imagines, for their Western box office appeal, the really problematic issue, and one the film constantly fudges, is the division between artist and prostitute that the geisha treads. Though Memoirs is at pains to emphasize the former, the selling of a young geisha’s virginity to the highest bidder is one of the plot’s central circumstances.

Based on the bestselling Arthur Golden novel, the film opens in the late 1920s with a mature Sayuri (Shizuko Hoshi) narrating how, as a nine-year-old named Chiyo (Suzuka Ohgo), she was sold onto the Kyoto human market by her parents. The older girl is immediately delivered into prostitution, while the arrestingly grey-eyed Chiyo is sold to a geisha house where she will work unpaid until it can be determined whether she has the requisite grace and beauty to succeed as one of the elegant performers.

The house is run with an iron fist and lazily supped pipe by Mother (Kaori Momoi) and the frightened Chiyo becomes friends with another girl, Pumpkin (Zoe Weizenbaum), but falls foul of the house’s ruling geisha, the cruelly beautiful Hatsumomo (Li). Her carnal appetites subvert the geisha code and her envy of Chiyo prompts the older woman to sabotage her education. At the same time, Chiyo is shown kindness by an older gentlemen known as Chairman (Ken Watanabe) and pledges one day to become his lover.

Years pass and the teenage Chiyo (Zhang) acquires a level of beauty that threatens Hatsumomo’s dominance of the house, especially when she is purchased from Mother by Mameha (Yeoh), who plans to transform her into a geisha and wrest control of Mother’s house from Hatsumomo’s plans of inheritance. Chiyo is renamed Sayuri and is separated from Pumpkin, who Hatsumomo picks as her own ward in their emerging battle.

Sayuri debuts in Kyoto’s geisha playgrounds, and despite her rival’s scurrilous gossip becomes the most celebrated performer in the land, enchanting the Chairman, his business partner Nobu (Koji Yakusho) and countless men besides, eventually selling her virginity in an elaborate ritual that claims a record price.

After World War II, when Sayuri is despatched to the country by the Chairman, she is approached by Nobu to sweet-talk an American consortium into securing construction contracts for he and the Chairman, a task she enlists Mameha and an older Pumpkin (Youki Kudoh)’s help for. This third act is by far the least satisfactory, the war scenes perfunctory and the rushed conclusion finalising a romance that rarely convinces and detracts from Sayuri’s coming of age drama.

While Yeoh is reliably regal and Watanabe acquits himself well, Zhang is stunning as the blossoming beauty at the heart of this story, yet outperformed by her younger self, Ohgo, in conveying the emotional shifts required by the narrative. Stealing every scene she glides through, Li is magnetic as the malicious Hatsumomo and the film suffers when she departs two-thirds in. The male roles are one-dimensional in comparison to their female counterparts and director Rob Marshall, while providing some vivid set pieces like Sayuri’s debutante dance and a sumo wrestling spectacle, offers uninspired direction that simply cannot match the work of his cinematographer Dion Beebe and costume designer Colleen Atwood.