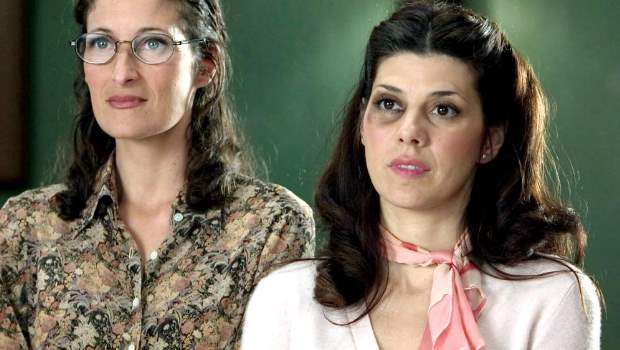 Summary: There have been lots of fabulous films about the power of dance; this isn't one of them.

Frank (Carlyle), a widowed baker, works all night and spends his days delivering bread in his little van, resigned to misery until one day he pulls over on a rural highway to help a dying stranger (Goodman); with his last breath the stranger reveals that he was on his way to fulfil a forty year old promise to his childhood sweetheart – a reunion at Marilyn Hotchkiss Ballroom Dancing And Charm School, where they first met. The stranger begs Frank to fulfil his promise, and then dies; Frank winds up enrolling at the school himself, and through the power of lindyhop, tango, waltz and merengue finds himself falling for the quiet charms of Marisa Tomei’s Meredith.

I was massively disappointed by this film, the title of which I can’t be bothered to type out again. Such a great cast – supporting roles are played by Mary Steenburgen, Sean Astin, Danny DeVito, Sonia Braga – all playing paper thin characters. And that goes for the leads too – poor Marisa Tomei has all the depth of a china doll, perched on a shelf for the boys to fight over. Speaking of which, whatever happened to Marisa Tomei? She used to be given half decent roles; now she’s reduced to playing second fiddle in second rate movies like What Women Want and The Guru. As for Bobby Carlyle – you just wonder what he was thinking. And why he didn’t have a few dance lessons – he’s terrible. There have been lots of fabulous films about the power of dance; this isn’t one of them.