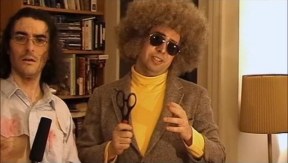 “Weapon Wielding Pyschos, Evil Temptresses, Creatures from Beyond, Forces of the Unknown, Zombie Sex…and a Journalist without a clue…” At first glance, LovecraCked sounds like a sleaze-soaked dream for lovers of trash cinema everywhere. Unfortunately the sad reality is that LovecraCked is a reminder of just how unwatchable movies at the fringes of the medium can be.

Framed by a linking structure that sees an inept journalist investigating the secret life of HP Lovecraft, the movie is split into a series of short films inspired by Lovecraft’s work. These short films (from the US, UK and Sweden) are a mixed bag, but mostly pretty hopeless. Best of the bunch is probably Bugboy, a tale of a woman who discovers her ex-boyfriend bursting free from a chrysalis. While it doesn’t head anywhere particularly interesting, it at least has a nicely creepy atmosphere and the stark black and white photography is vaguely reminiscent of Eraserhead.

It’s easy to spot the audience LoveCraCked is aiming at. In one sequence the journalist waxes lyrical about Stuart Gordon’s cult classic Re-Animator (which is of course also based on an HP Lovecraft work), while in another embarrassing segment Troma head honcho Lloyd Kaufman is given free reign to promote his own movies. But LovecraCked doesn’t compare with the work of either Gordon or Kaufman. Low budget horror-comedy might seem an easy genre to master at first glance – after all, part of the fun with movies like The Toxic Avenger is in their ramshackle, deliberately trashy nature. But the best of these movies work partly because of their insane plotlines, but also because they remember that horror-comedies have to be genuinely funny or horrifying (or both).

LovecraCked is a messy, mostly laugh-free movie, and tone-wise it’s all over the place. You’ve got to worry when you come away with a feeling that Creepshow 2 was a forgotten masterpiece.

For anybody that makes it through the entire movie, then prepare for more of the same in the extensive selection of extras on offer. There’s a host of other short films that didn’t make the final cut alongside production company Biff Juggernaut’s earlier short The Voice Inside. Then there’s the standard painfully unfunny blooper reel, music videos and a trailer.