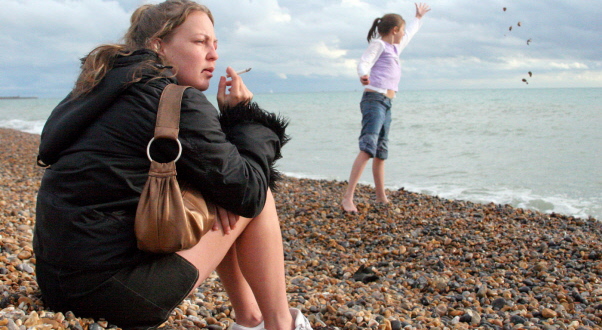 As the final credits of London to Brighton roll, you can’t help but feel that the world is truly a place without hope. But don’t be put off by the despondent atmosphere or the strong subject matter – this is the British movie of the year.

When dome-headed pimp Derek (Harris) asks prostitute Kelly (Stanley) to locate a child for one of his clients, Susan initially balks at the suggestion. But eventually she caves in, and it doesn’t take her long to locate eleven-year-old runaway Joanne (Groome), a tough-talking kid who Susan accompanies to the house of a wealthy bachelor (Morton). The results of this rendezvous send Susan and Lucy fleeing to Brighton, hotly pursued by Derek and his loyal henchman Chum (Nathan Constance).

It’s difficult to make a movie like this without it coming across as a self-indulgent wallow in misery – and boy, is this bleak. But, as with some of the best nail-biting British dramas from Scum to Nil by Mouth, director Williams remembers he’s crafting a movie rather than just a mood piece, and frames the plot as a vice-like thriller. Set within a flashback structure where events are gradually pieced together, the film is filled with one impossibly tense scene after another, heightened by the fact that you genuinely can’t predict how characters will react to particular situations.

Documentary-style visuals are very much in vogue at the moment from Battlestar Galactica to Borat, but the hand-held camera and location filming of London to Brighton are well-suited to a film that paints a much more telling picture of contemporary Britain than a thousand Notting Hills or Love Actuallys.

Stanley is stunning as Kelly – beaten-down, desperate but still embodied with a dignity and morality that’s almost alien to the world around her. She’s more than matched by Groome, who is horrifyingly convincing as the naïve youngster desperately attempting to maintain a streetwise exterior. Groome’s heartbreaking performance is key to the film’s success, and makes London to Brighton almost unbearable to watch at times.

Unremittingly bleak and utterly gripping, it isn’t difficult to see why London to Brighton caused such a stir on the festival circuit earlier this year. It demonstrates just what British cinema is capable of when it refuses to play safe.