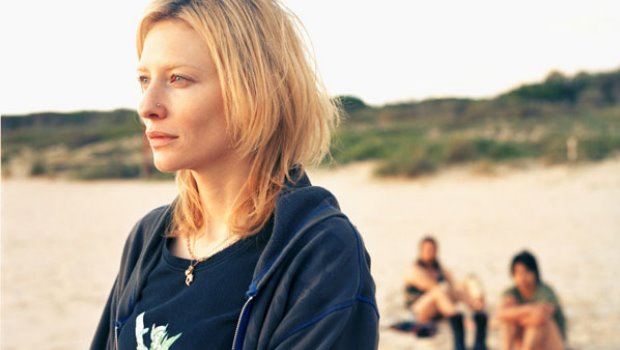 Tracy Heart (Blanchett) is a recovering junkie. With the help of her hard-working single mother, Janelle (Hazlehurst), Tracy has turned her life around, swimming every day and managing a video shop in the part of Sydney known as Little Saigon. She has managed to stay clean, and is applying for a loan to go into partnership in the shop, hoping to expand the business. Tracy has pretty much cut herself off from life – she goes from the pool, to work, to bed, with Janelle by her side.

As the family prepare for a birthday dinner for Ray (Henderson), Tracy’s little brother, they are surprised by a knock at the door. It’s Jonny (Nguyen), Tracy’s ex, a Vietnamese Australian, back from a five-year stint in Vancouver. Tracy is shaken; Jonny is a vivid reminder of the bad old days, as is Lionel (Weaving), the gay ex-footballer and former family friend who introduced Tracy to heroin. Lionel is trying to get off the junk with Tracy’s help.

Ray, who lost his leg in a car accident caused by Jonny, is a suburban drug dealer, hoping to make it up the crime ladder, He hooks up with Stephen Moss (Tobeck), right-hand man to Bradley ‘The Jockey’ Thompson (Neill), an aging Mr Big, who happens to be Lionel’s ex-lover and his dealer. Moss has been playing a double game – he’s meant to be helping to wind up Brad’s business interests, but has in fact been running the businesses behind his back.

When Tracy’s loan applications are turned down due to her poor credit scores, she confides in Jonny, and they get closer; Lionel, suffering in cold turkey, begs her to score for him…

Trying to write the synopsis for Little Fish reveals the complexity of the relationships in the film and how, though the central story is Tracy’s, every character impacts on every other character, and the genre elements could potentially swallow up the story. Thankfully, it’s a delicate, sober work, with the details of the Hearts’ backstory revealed gradually, demanding your full attention and rewarding your patience.

Fine work here from all the actors. We expect great things from Blanchett, and its probably easy to dismiss her playing an Aussie as easy, but Tracy is about as far from Blanchett as Katherine Hepburn. She’s a working class Sydneysider with a share in a video shop the extent of her ambitions; miles away from the autocratic aristos Blanchett, with her aquiline profile and pale, haughty, thoroughbred features, so often plays. Tracy seems absolutely caged by her past; trapped in an almost incestuously close world of drugs and despair.

Similarly, this is not the glossy Australia of the Sydney Olympics. It’s a multicultural world that reminded me of Camden, where Ray and Tracy speak Vietnamese as a matter of course and are often the only whites in the room. Jonny straddles both worlds, attempting to escape the restrictions and expectations of his traditional extended family. As an outsider, he is drawn to the warmth and affection of the Heart family, and their unconditional love for each other.

The film avoids melodrama and never sentimentalises the characters, so the glimmer of hope offered at the end – and the lack of tidy resolution, Hollywood style – is highly satisfying.