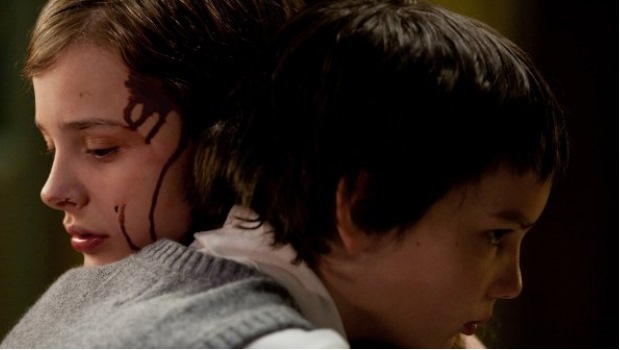 Let Me In Review

Summary: Sadly, there is nothing fresh about this film.

This is a brilliant, but pointless film…. End of review. That is where I could and should stop writing about this US remake, because while this is undoubtedly a clever take on the vampire genre with solid acting and plenty of quality scary moments, it is absolutely identical to the excellent original version.

Literally all that has changed is the title, and even that only slightly from Let The Right One In to Let Me In. I’m sure that if you played the two films together side by side, the same scenes would occur at the same time, and you’d be sure you were watching the same film. They might as well have dubbed the original into English and be done with it.

I wrote a review about Let The Right One In when it came out and extolled the virtues of its stunning camerawork, creepy settings, and wonderful take on the vampire genre where your sympathies are torn by the fact that the fanged protagonist and her accomplice are nice people forced to attack and kill out of absolute necessity, rather than sadistic pleasure. The same can be said of this film.

Director Matt Reeves isn’t the first US film maker to take a decent foreign language horror or action film and do a “similar” remake. There are plenty of Asian examples, such as The Ring and Infernal Affairs, and I’m sure there’ll be plenty more in the future. It just strikes me as a sell out, lazy way of film-making.

I’m especially disappointed that Reeves chose to do this after he had been quite inventive with Cloverfield, using a shaky handheld camera in the hands of a novice kid as a way of creating tension, only giving snippets of the monster as panic ensues. Although obviously not a new technique (see Blair Witch Project, Rec etc), he made it seem fresh and intriguing.

Sadly, there is nothing fresh about this film. For those who have watched Let The Right One In you will already know the plot to Let Me In, for those unfortunate few who haven’t, the basic premise is that a young boy living in a quiet remote town is being bullied at school and so turns to a rather strange, but pleasant pale looking girl who’s moved in next door, but turns out to be a vampire desperately in need of blood on a nightly basis, resulting in several gruesome murders.

The cast all do a fine job, particularly Kodi Smit McPhee and Chloe Moretz who play the leads, and again like the original the film is well shot and the snowy, desolate setting sets the tone and mood of the film brilliantly.

If this was a stand-alone film I would give it a 4 out of 5, but because it is not it only deserves a 3.