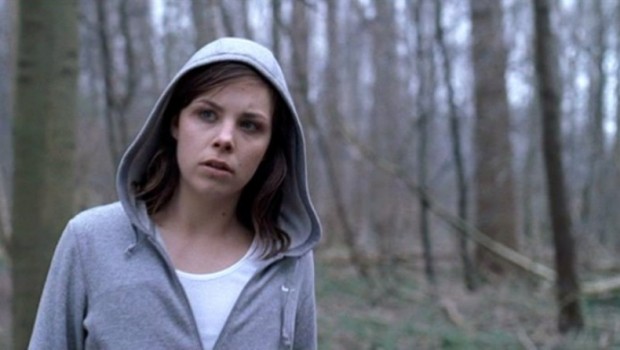 Summary: If you like your horror movies on the arty and unusual side, this is highly recommended.

Truth be told, Left Bank is the kind of movie where it’s best to go in knowing as little as possible beforehand. So if you don’t want any hint of a spoiler, it’s best to stop reading and go slap on the DVD right now. All you really need to know is that this is an unusual Belgian horror movie and it’s very good indeed.

If, however, you are still reading and you’d like to know a little more about Left Bank before committing to it, here are a few more details worth bearing in mind…

The heroine of Pieter Van Hee’s film is Marie (Kuppens), a socially withdrawn 22-year-old with ambitions of becoming an Olympic athlete. When she meets charming car salesman and archer Bobby (Schoenaerts), it’s the beginning of an intense relationship that culminates in Marie moving into Bobby’s flat in Left Bank – a run-down estate in a district of Antwerp that boasts an unusual, troubled history. But something just doesn’t feel right about the apartment block or the people in it. Why does Marie keep throwing up all the time? What’s the truth behind the stories of a black hole in the basement? And why did the previous tenant mysteriously disappear one day?

These questions, and others, are slowly answered as the narrative unfolds – well, sort of anyway. This isn’t the kind of film that deals in tidy, predictable resolutions, and there’s a weird, off-kilter atmosphere that coats every plot detail in a thick layer of unease – you’re never quite sure of what’s relevant and what isn’t, or who, if anyone, can be trusted.

The film’s publicity has compared it to The Wicker Man and Rosemary’s Baby – bold claims that, for once, are actually justified. As with those fear flicks, Left Bank establishes a sympathetic central character who gradually uncovers the horrifying secrets behind the dull veneer of everyday life, and as with those films it walks a clever line between paranoia and truth, between realism and surrealism.

Left Bank is the debut feature from director Pieter Van Hees, who has announced it is the first in a thematic trilogy entitled ‘Anatomy of Love and Pain’, which discusses love in all its aspects. On the strength of Left Bank’s wonderfully creepy, slow-burning atmosphere and startling imagery, these forthcoming projects are exciting prospects indeed. If you like your horror movies on the arty and unusual side, this is highly recommended.