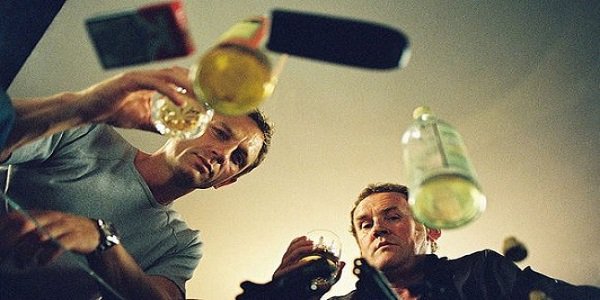 The wave of bleak, hard-hitting British gangster movies of the 70s and 80s morphed into a different kind of hoodlum with the arrival of Lock, Stock and Two Smoking Barrels in 1998. Lock, Stock took the bones of the genre and threw in colourful characters, convoluted plotlines and knockabout comedy straight out of a caper movie – a hellava lot of fun, but more middle-class gangster fantasy than gritty realism. Layer Cake, though with a screenplay by JJ Connolly adapted from his own novel, is very much a film in the Lock Stock mould, especially when you consider that it’s Lock, Stock’s very own producer Matthew Vaughn who’s at the helm. But while that very fact might bring cold sweats to those scarred by the many dreadful post-Lock, Stock gangster movies (Love, Honour and Obey anyone?) Layer Cake does have enough swagger and energy to make it compelling – if rather confusing – viewing.

Daniel Craig is the anonymous drug dealer who sustains his affluent lifestyle by abiding to a strict set of rules – never rip off suppliers, steer clear of guns and learn to respect the enemy. But when Craig and his band of loyal friends enter into negotiations to sell two-million pounds worth of ecstasy tablets they suddenly find themselves attracting the attentions of both the Serbian underworld and prominent gangster kingpin Eddie Temple (Gambon).

All of which may sound simple enough. But Layer Cake’s problem is that it tries to shoehorn in too many of the book’s plotlines into an hour-and-a forty minute’s running time when it really needed to become a little more streamlined to work effectively. In a way criticising a film for too much plot is odd considering so many thrillers have exactly the opposite problem. Yet the inclusion of so many half-explained characters, histories and micro-plots has the over-riding effect that you start to lose focus over the movie’s core and that potentially engaging characters are left rather hanging by the wayside.

Still, the movie races by at a whippet’s pace that just about holds the story together, backed up by some hyperkinetic visuals to match. Predictably, like Lock, Stock the aesthetics in Layer Cake are often rather gimmicky (scenes surging into each other, speeded-up zooms, stylised point of view shots). Whether this is a welcome reaction against the staid conventions of traditional British cinema or is just an elaborate guise to cover up a fundamental lack of substance depends entirely on your point of view, but it’s difficult not to be impressed by the cinematic bravado of the movie.

“You’ve mentioned Lock Stock quite enough now, pal!” you’re probably screaming at this point. Yet it is difficult to reign in those Lock, Stock comparisons, as it’s the obvious forerunner to Layer Cake however much the filmmakers might protest. To be fair this is a rather darker movie. The comedy here is blacker and more importantly Daniel Craig’s drug-dealer is a much more solemn pivot for the film than the four wise-cracking leads of Guy Ritchie’s debut (though inevitably Dexter Fletcher does pop up in a supporting role – will the man ever live up to Press Gang?). Craig has just about enough charm, toughness and naivety to hold everything together as we watch his hermetic lifestyle ripped before our eyes. Of course he’s a very much a middle class entry-point for us to enter this exaggerated working class world, but at least the film doesn’t pretend that he’s anything but. To up the gangster credentials a little Craig is backed up by those old pros Kenneth Cranham and Michael Gambon who are both blessed with voices that scream out to be married to a life of crime. Then there’s Sienna Miller who is simply dazzling in her three brief scenes- not bad considering she’s languishing in such a non-existent part.

Layer Cake is no Get Carter (or even a Lock, Stock), but it does make for a zippy crash course through a cartoonish world backed by a neat eye for the absurd (the very-ordinary hitman commuting by train) and the requisite number of inventively grisly scenes. Oh, and full marks for the iconic iron-and-yellow-rangerover ad campaign too.