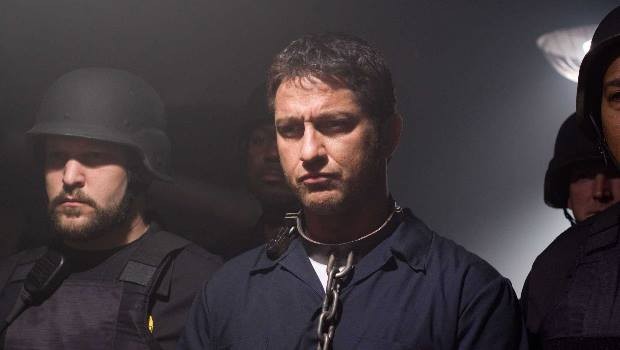 Summary: Avoid this drivel at all costs.

This slab of big, dumb, glossy pap has an interesting idea at its core. The innocent man wronged is a movie mainstay, and we’ve seen his kind battling against the odds for some kind of personal justice time and again. But what if, unlike Harrison Ford in The Fugitive, or Tom Cruise in Minority Report, the wronged man lost his own sense of right and wrong somewhere along the way, and became an amoral monster, driven to mete out disproportionate measures of wrath to anyone and everyone? If it were done well, that could be a pretty terrifying movie. If it were done badly, it would be Law Abiding Citizen.

The film positively glistens with stupidity from its opening moments. If director F. Gary Gray’s lack of interest in believable characters isn’t obvious from the speed with which Gerard Butler’s motivation is supposedly established, it becomes unmissable after Jamie Foxx’s lawyer appears on the scene, making some ridiculous and irrational choices that conveniently fuel Butler’s growing sense of injustice. Cut to 10 years later and Butler’s had time to set up so many elaborate ways of killing people that even Saw’s Jigsaw would stand up and applaud.

Granted, there is a certain amount of mindless fun to be had with this kind of film. I enjoy seeing Butler get his maniacal grimace on and deliver lines like “I’ll kill everyone… it’s gonna be biblical” as much as the next Spartan. But when Viola Davis, who gave a jaw-dropping, Oscar-nominated single-scene performance in last year’s Doubt, is so inexcusably wasted by a director as she is here, then we are dealing with something much more dangerous than a mere guilty pleasure. This is an all-out assault on decent cinema.

You can actually feel yourself losing intelligence as Law Abiding Citizen moves interminably towards its meaningless conclusion, and my advice, if you have the misfortune to end up in a theatre where it’s playing, is get out while you can. Avoid this drivel at all costs.