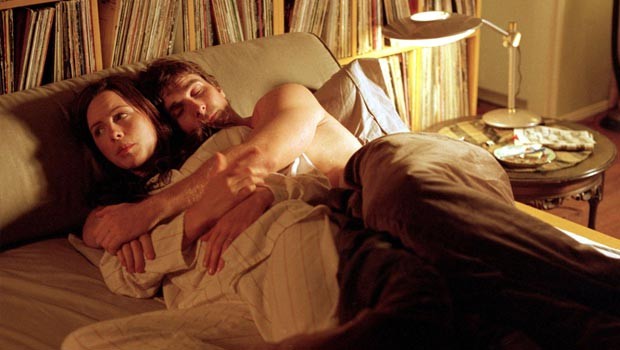 Summary: The failings of this movie are those of a fledgling talent.

It’s probably something most of us have had a few misgivings about at some point: introducing a partner to the parents. You can never be quite sure they won’t drag up some embarrassing scenario from your adolescence. What if it’s your parents’ own adolescent behaviour you’re worried about though. Forty-somethings behaving like teenage dirt-bags, I mean. Laurel Canyon reads like the twisted cousin of Meet the Parents. Instead of a father putting the young squire through his paces to guarantee a suitable specimen for his daughter, this film features a son so embarrassed by his successful yet bohemian rock-producing mother Jane (Frances McDormand) that he’d rather not introduce her to his beautiful young academic fiancée.

Sam (Christian Bale) and Alex (Kate Beckinsdale) move to the film’s titular canyon in Hollywood Hills while he, the serious, hard-working psychiatrist, begins a residency in a medical institute and she completes her dissertation on Drosophilia Genomics, or to speak more plainly, the genetics of the fruitfly’s reproductive behaviour. Their intended retreat, however, turns out to be something of a Pandora’s box, and a nasty little maelstrom of conflicting cultures, as they arrive to find the house – just one of Jane’s LA properties – already in use. Jane is working on a new album with her new 20-something boyfriend’s band.

Sam, wary of his unapologetic mother’s influence on Alex, decides they should rent their own place, but Alex’s house-hunting is half-hearted at best. Her curiosity roused by the band’s free-booting hedonism, she is stirred by an unexplored rebellious spirit. Alex studies ‘determinism’, which Jane’s lover, frontman Ian (Alessandro Nivola), at one point clownishly calls ‘dominance’, but this is where the script makes itself a bit obvious. We’re led through a plot of such inevitability that there’s a temptation to shout at the projectionist to speed things up until the knitty gritty arrives. Furtive glances early on ensure us that Ian clearly intends to prise his way into bed with Alex, or to ‘liberate’ her as he and Jane see it, and when one thing leads to another, she’s not exactly shy. So, from Sam’s point of view, the crucial question becomes “What do I do when I find out that my mother and her boyfriend (more of whom in a moment) are cavorting with my bride?”

Unfortunately, the film doesn’t really tell us what Sam, or anyone else might do. What’s more, director Lisa Cholodenko tries to juggle with our sympathies but doesn’t really do enough to convince us that we should care all that much. Alex’s quite outright betrayal tends to make us side with the apparently devoted Sam, but even he entertains fantasies involving his colleague Sara (Natasha McElhone). Equally, there isn’t even that much to suggest that the young couple’s relationship is worth saving.

Ultimately, there is nowhere near enough flesh on the bones of what is a fairly interesting plot. There is little grounding to the character’s actions and little exploration of their sexual motivations. Choldenko opens up a clash of disparate worlds, extremes – the hedonistic and the methodical – that are too cut and dry, only to retreat from the actual consequences of the film’s major plotlines. I spent a while asking myself if I was supposed to be laughing and it’s equally hard to see the point the director is making. It’s barely a shock now, is it, to discover pot-smoking and sexual profligacy in a neighbourhood with a little too much wealth and such a stench of neurosis?

Another example of the script’s transparency is indeed in the film’s pre-occupation with the psychotic. (Amusingly, Bale’s character does bear a certain resemblance to Norman Bates, specifically in his butter-wouldn’t melt mien. And the Psycho parallels don’t stop there: Sam isn’t the first celluloid character to suffer in the dark shadow of his mother.) With a foregone surety, Sam the psychiatrist has his own little psychotic episode. We skirt for a while round the causes of his own insecurities (and yes, the roots go back to childhood) but the only ostensible narrative purpose of the scenes in the hospital seem to be to draw parallels between the patients in the psychiatric ward and the behaviour that passes for ‘creativity’ back at Jane’s Hollywood home. But where Sam deals with “pained souls”, the band fit better in the “pains in the arse” category. Really though, I think we’re being asked to believe they are the very model of charismatic English pop stars. I had not thought the stock of English pop had sunk so low.

The failings of this movie are those of a fledgling talent. This is only Cholodenko’s second feature, following 1998’s High Art (which, similarly, she wrote as well as directed). Despite the shortcomings, she does manage to bring out her characters’ vulnerabilities in some genuinely touching scenes, most specifically those involving Bale and McDormand. The latter shines as a complex, middle-aged woman, giving a performance to rank with such diverse roles as her anxious mother in Almost Famous and her zany traffic cop in Fargo. Her character fills the screen, giving us glimpses of a depth that is all too little explored by the film as a whole.