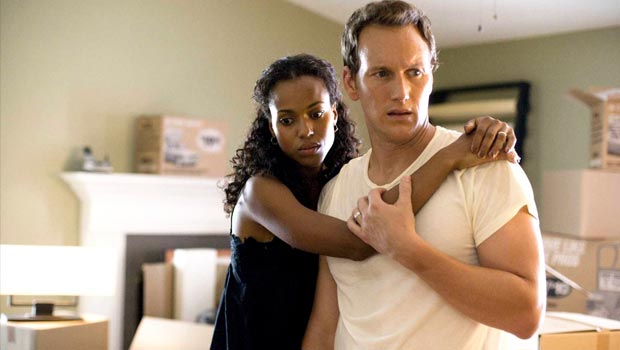 Summary: For the most part Lakeview Terrace is an uninvolving bore.

Samuel L Jackson is a mighty fine actor. He can make bland material interesting, he can command an audience’s attention with complete confidence and he can even make George Lucas’ dialogue sound cool. He is the reason why this neighbourhood terrorisation thriller occupied the Number 1 Box Office slot in the US for a week in September this year, and he is certainly the chief reason why anyone will be making plans to see it in the UK this weekend. So it’s something of a disappointment that the great man’s performance here is one-dimensional and predictable, and is just one of many factors that combine to make Lakeview Terrace a tiresome and run-of-the-mill experience at the movies.

Directed by Neil LaBute (In the Company of Men) from a script by David Loughery and Howard Korder, the film takes place in an up-market LA suburb where Jackson’s single-parent cop character, Abel Turner, takes a disliking to his new neighbours, interracial couple Chris (Patrick Wilson) and Lisa (Kerry Washington). In the film’s clever opening scene, we see the couple’s arrival through Abel’s eyes, and by his gradual disgusted realisation that Chris is not in fact “the delivery guy” but Lisa’s other half we clearly understand Abel’s racist perspective.

However, this subtle touch is not indicative of what is to follow, heavy-handedness is much more the watchword as LaBute unfolds his contrived story to the backdrop of fast-approaching LA wildfires. From the moment of Abel and Chris’ first meeting we know the route being mapped out for the film, a series of escalating neighbourly differences that will ultimately result in Abel flipping out and Jackson getting to exert the full force of his screen presence.

This might sound like fun, but almost every turn the story takes to get to its laughably overblown conclusion rings false, so any tension established in the film’s beginning soon gives way to incredulity. This is particularly true of the relationship between Chris and Lisa, and the ease with which Abel is able to drive a spike between them. The script calls for these two to move from a place of complete loving trust to anger and frustration very quickly, and while the actors give their best, we don’t believe in the characters for a second. Abel is a more convincing character, and the film works hard to show us that he isn’t a monster, but Jackson’s performance coasts by on his familiar intensity and a tendency to bulge his eyes menacingly, making him more of a caricature than genuinely scary.

LaBute made his name in theatre and has always excelled at getting under the surface of what makes characters tick, men in particular. But while Lakeview Terrace has a few moments where this perceptiveness comes through, for the most part it is an uninvolving bore.