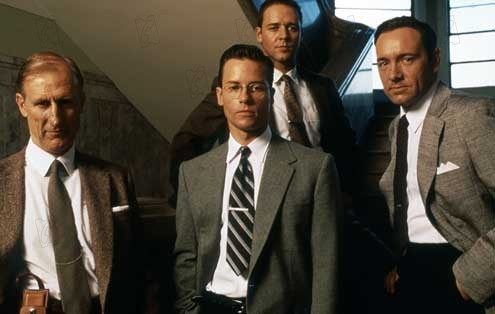 Summary: One of the more polished dramas to emerge from Hollywood in the last twenty years, it remains Hanson’s best film to date.

Director Curtis Hanson and co-scriptwriter Brian Helgeland deservedly won an Oscar for this taut rework of James Ellroy’s epic novel of corruption and vice in 50s’ Hollywood. Blending characters, distilling reams of Ellroy’s 500 or so pages – it could easily have been a hatchet job to rival its bullet pulped scene of bodies strewn across a diner. Instead, this tightly wound, noir-of-yore homage drew favourable comparisons with Polanski’s Chinatown, securing an Academy Award for Kim Basinger’s Veronica Lake-a-like hooker. But it’s the male leads who truly excel: As the slick detective and cop show consultant Jack Vincennes, Kevin Spacey affords his character depth and redemption, whilst Russell Crowe and Guy Pearce announce future top-billing with complimentary turns as the brooding Bud White and scheming Ed Exley. In one of the film’s most memorable sequences, Exley’s calculated questioning is blown aside by Bud’s force of nature rage, in a brilliant example of performance driven drama.

Chinatown ‘s muted on-screen colour portrayed a world distinct from classical noir and retained a suggestively sinister tension, but such subtlety is largely absent from Confidential. The traditional shadows of LA’s mean streets are here bathed in perpetual brightness, throwing spotlights onto a spurious “Paradise on Earth” claim and an underbelly of sleaze – not least in the pages of Hush Hush, a lurid scandal mag run by the grease-palming Sid Hudgens. Eagerly played by Danny DeVito, this is just one of many excellent supporting performances sustaining the image of a crime-inclined community. As the tagline says: “Everything is suspect. Everyone is for sale. And nothing is what it seems …”

Some critics accused the film of using history hypocritically. Taking easy shots at old-style show business whilst exploiting the dream factory. Selling the past for nostalgia and allowing good to triumph. Though true to an extent – Confidential presumes its audience’s familiarity with noir convention and cliché. The image of a detective lighting a cigarette beneath his hat’s silhouette is, according to Vincennes, the “television version” for audiences unready “for the real me” – it concludes with its’ protagonists future decidedly uncertain, more so than is initially obvious. And, in some respects, it re-examines the genre.

In traditional noir, black American communities featured as an exotic place of inscrutable deviance. But in Confidential, race becomes a troublesome issue, with assumed institutional prejudice manipulated by the racially marginalised. Indeed, despite fighting shy of many of Ellroy’s more shocking dialogue and set-pieces, the film had the hard-arsed novelist noting a “sub-conscious tweaking” of his narrative, addressing more recent LA history and the beating of Rodney King. Where shades of grey once dominated noir conventions, Confidential takes everyone’s guilt for granted, and in a maze of moral compromise, confessions are sought and framed “in Technicolour”. One of the more polished dramas to emerge from Hollywood in the last twenty years, it remains Hanson’s best film to date.