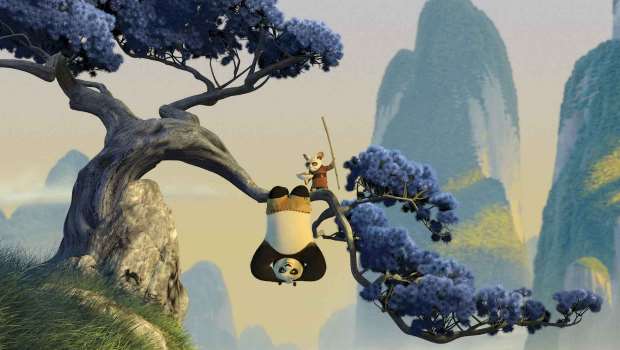 Kung-Fu Panda looks fantastic and kids will adore its roly-poly, furry hero. But this is strictly formulaic animation from DreamWorks, wasting a stellar cast and a marvellously high concept idea.

The strikingly beautiful, hand-drawn opening sequence of black slashes and swathes of bloody red promises much, but thereafter, despite some pacy pursuits and lively duels, nothing of the more conventional animation is ever quite as thrilling.

Awaking from dreams of kung-fu glory, Po (voiced by Jack Black) is such an overweight panda he can barely rise from the floor. He works for his father, Mr Ping (James Hong) in a noodle shop, though how Ping, a bird, has fathered a panda remains a mystery, not least to Po, even if animals of all species seem to happily co-exist in their beautiful Valley of Peace.

Po can barely climb the thousands of steps leading up to the valley’s ancient temple, yet being the insatiable martial arts enthusiast he is, he joins everyone else to witness the selection of the Dragon Warrior, destined to engage the dreaded Tai Lung (Ian McShane), a fearsome snow leopard, in combat.

Despite their initial misgivings, Shifu and the Five come to understand that they must train up the hopeless bear, especially after Tai Lung escapes from his mountain prison in one of the best sequences of the film, featuring dazzlingly zippy animation.

Shifu nevertheless remains at a loss how to transform his fat student into a fighting machine until he discovers that the best way to motivate Po is through his stomach. The pair’s subsequent contest for a solitary dumpling really enlivens the obligatory training montage sequence. When Tai Lung defeats the Furious Five and then Shifu, only Po stands between him and the secret of the Dragon Warrior’s power.

Kung-Fu Panda is straightforwardly predictable yet full of slapsticky comedy and if the casting of so many A-listers in the surprisingly negligible roles of the Furious Five is baffling, there are at least greater dimensions to Shifu and Po. Hoffman is perfect as the exasperated, Yoda-like sage while Black is appealing yet restrained in the lead and perhaps scriptwriters Jonathan Aibel and Glenn Berger might have done more to exploit the actor’s trademark crazy schtick. McShane is growlingly good as the villain and the animation marries hyper-realistic detail with some gorgeous, painterly touches in the landscapes.