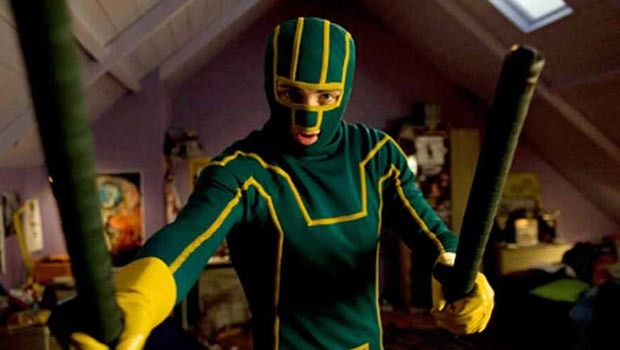 Summary: Get to the cinema and see Kick-Ass for yourself.

For once, the title is spot on. Matthew Vaughn’s comic-book adaptation really does kick the asses of all recent attempts to bring something fresh to this genre. With a similar premise to last year’s Watchmen – superheroes with no powers – but none of the self-importance and a whole heap more humour, this is a film that could easily still be bobbing around the public consciousness when the best of 2010 lists are compiled in December. It’s not for everyone, containing a dark streak a mile wide and enough child-related swearing and violence to keep it from troubling Iron Man 2’s box office, but for adults with sufficiently skewed sensibilities, it’s a must-see.

First and foremost, Kick-Ass is really, really funny, and for the best experience it should be enjoyed with as packed and up-for-it an audience as possible. To his great credit, Vaughn is never afraid to slip in a joke, even in the film’s most intensely action-packed moments, but never at the expense of good characterisation; the humour is always rooted in the characters. Aaron Johnson is one of the film’s biggest assets in this respect, his uninhibited performance as Dave Lizewski, the kid who decides to put on a wetsuit and fight crime, is perfectly balanced between naivety, stupidity and good ol’ fashioned movie heroism; crucially, he ensures we’re laughing with him or at him at all the right moments. He also handles the witty narration very well, and is blessed by Vaughn and his co-writer Jane Goldman with all the best lines, from a hilarious reference to Lost to a great aside about serial killers.

Vaughn and Goldman stick closely to the main premise of Mark Millar’s comic, going to great pains to explain that, unlike other superhero stories, Kick-Ass takes place in our reality. In the first conversation we hear between Dave and his two best friends, they list various superheroes then one-by-one dismiss their real-world credentials. This is a bold step from the writers, as it could easily have led them into credibility-holes of their own making, but it pays off, allowing the film to occasionally jolt the audience out of the comic-book comfort-zone, as when a key character is stabbed with gut-churning results. On the downside, a few moments of all-too-convenient plotting stick out somewhat, and Christopher Mintz-Plasse’s sidekick character Red Mist isn’t very convincingly developed; disappointing blips in an otherwise tightly written script.

But the film belongs to Nicolas Cage and Chloe Moretz, the deadly and very un-PC father/daughter crime-fighting team known as Big Daddy and Hit Girl. Cage’s performance – unhinged but somehow endearing – is not only the comedy highlight of the film, but also has an effective dark undercurrent; Big Daddy is a believable depiction of righteous anger taken to a psychotic extreme, and a kindred spirit to Watchmen’s Rorschach. Moretz is equally good, making Hit Girl both sweet and sadistic, and hinting at the messed-up girl behind the explosively profane dialogue. Her devotion to her dad is at once hilarious and deeply distressing, and Vaughn handles their relationship’s journey beautifully, paying it off with an unexpectedly moving moment amongst the flying bullets. The pair also provide most of Kick-Ass’s thrilling action sequences, in which Vaughn displays the same flair for visual invention that gave his debut Layer Cake such energy. One stand-out scene involves Big Daddy on a brutal rampage taking down one goon after another, and it’s masterfully done, precisely constructed and awesome in its intensity. Just one more reason, like you needed one, to get to the cinema and see Kick-Ass for yourself.