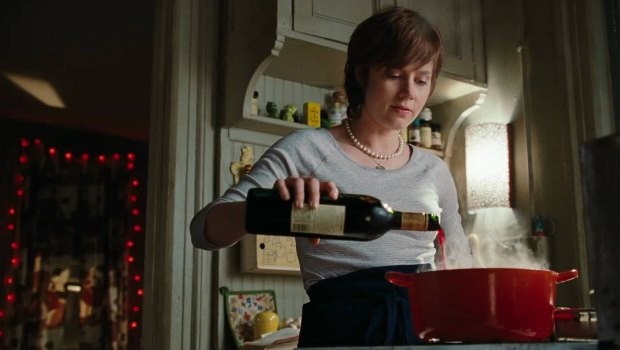 Summary: Every time the action switches to 2002, you find yourself yearning to return to the bustling Paris of 1949.

Corresponding two true stories from over half a century’s distance, Julie & Julia is an appealing idea from director and romantic comedy veteran Nora Ephron. But it’s fatally compromised by one of the stories being stultifyingly boring and suffering by the comparison.

To establish Julia Child in some kind of context for UK cinemagoers, Fanny Craddock would seem a reasonable touchstone. Child was a matronly, slightly eccentric gourmand who became a TV chef and icon, albeit without Craddock’s waspishness, and it was her we’re given to understand that popularised French cuisine and cooking techniques in America. The film adapts her autobiography My Life In France and intersperses it with scenes from the blog-turned-memoir Julie & Julia, which relates New Yorker Julie Powell’s year making all the recipes in Child’s mammoth tome Mastering the Art of French Cooking.

So this is two movies in one, one quite charming, the other quite dire. Meryl Streep is never less than entertaining as the trilling Child (having no familiarity with her, I’ve no idea how close the portrayal is – a Saturday Night Live skit watched by Powell starring Dan Akroyd offers a pretty broad caricature) and she has a fine foil in Stanley Tucci as her husband Paul. Soul mates for whom food is an integral part of their shared sensual devotion, they are that rare thing in contemporary cinema: a rock-solid marriage at the heart of the story.

As Powell, Amy Adams has much less to work with. Fielding phone calls in a Manhattan office overlooking Ground Zero, advising angry and despairing victims of 9/11 on compensation, the character nevertheless seems horribly self-absorbed, interpreting her gruesome friends’ professional success as a personal slight against her. So she begins her blog, cooks dish after dish after dish and has a brief falling out with her tediously supportive husband Eric (Chris Messina). And that’s it. Modern, internet-enabled narcissism that’s big on complaining and clumsy exposition. Every time the action switches to 2002, you find yourself yearning to return to the bustling Paris of 1949.

Indeed, Powell’s only redeeming moment comes when she learns via a journalist that the 90-year-old Child disapproves of her venture. Irrespective of the possibility of them ever meeting, Ephron skips away from the ramifications that this moment offers, having Eric voice some banal platitude before the film wraps up happily ever after. Streep may occasionally overwhoop in her performance, especially when her sister Dorothy (Jane Lynch) comes to stay. But her sleeves rolled up, can-do attitude injects far more joie de vivre into this ill-conceived picture than it deserves.