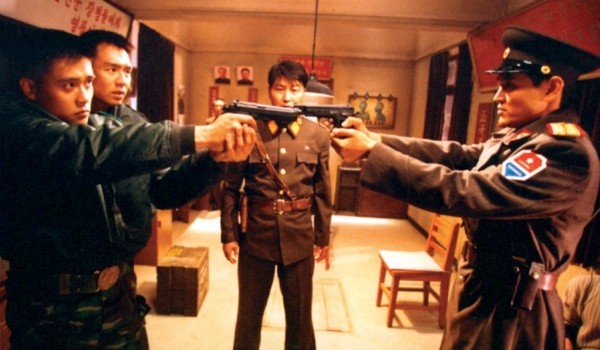 Summary: Nothing in JSA may seem particularly radical to Western audiences, but in South Korea the film tackled something of a taboo topic head-on - and was rewarded in breaking all box office records in its homeland.

In the wake of the phenomenal international success of Oldboy comes the belated UK release of writer-director Park Chan-Wook’s second movie from 2000. Korean cinema has increasingly become one of the movements to watch over the last couple of years with other releases such as The Isle, Chihwaseon and Shiri all heralding directors with unique, often challenging approaches to filmmaking. All of which is a long way from a few years ago when Korean movies could barely get distributed on these shores.

JSA begins with the Korean-born Swiss-raised Major Sophie E. Jean (Yeong-ae Lee) investigating an incident on the demilitarised zone between North and South Korea. Two North Korean soldiers have been left dead and tensions are high after an episode that could prove to be the incendiary needed to spark a full-scale war. A wounded South Korean border guard, Sgt Lee Soo-hyeok, has been found on the demarcation line between the two sides and claims that he was kidnapped by the North. As Major Jean proceeds to interrogate the soldier the truth is gradually revealed through flashback.

While not quite as gripping (or as bloody) as either Oldboy or Sympathy for Mr Vengeance, Joint Security Area nevertheless makes for both an absorbing thriller and a potent comment on North-South relations. It goes without saying that Park’s visual panache is very much in evidence, from the often playful camerawork (shots lensed through a telescope, a character freezing in mid air as he plunges from a window) to more lyrical moments of the wind eerily blowing across marshland. Park also manages to put together some expertly-orchestrated scenes – such as the integral moment where Sgt Lee finds his foot trapped on a landmine – that have a genuine sense that they could lead absolutely anywhere.

Really JSA is two stories in one. The first, which concerns Major Jean’s investigations as she also discovers the truth about her own Korean father, is far less interesting and plays like a reworking of A Few Good Men with an added dose of well-meaning politics. Indeed, the first half hour which sees Jean arrive at the DMZ and set up the subsequent plot, proves to be a rather inauspicious start with large chunks of eyebrow-raising exposition and unconvincing acting not boding well at all. Far more intriguing is the story about the border soldiers which, without wanting to give too much away, manages to be tense, touching, funny and honest. The performances behind the four soldiers are all excellent, the smallest of glances and exchanges convincingly depicting relationships that move swiftly between mistrust, uncertainty and familiarity. Unfortunately the flashback structure between the two narrative threads does prove to be a rather irritating device, and you can’t help but wish that the movie had focused on the central story in a more linear fashion that would have suited it far better.

Nothing in JSA may seem particularly radical to Western audiences, but in South Korea the film tackled something of a taboo topic head-on – and was rewarded in breaking all box office records in its homeland. Yes, JSA is flawed and it would take his later movies to prove what Park what was really capable of, but this is nevertheless a bold and often moving account of Korea’s current political stalemate.

The main attraction here is a documentary – The JSA Story – featuring interviews with cast and crew and where Park reveals his fear of getting arrested for dealing with such sensitive issues. There are also interesting stories of how the crew set about recreating the real strictly off-limits DMZ with a mixture of sets and CGI, and how the North Korean soldiers’ costumes were recreated from a calendar obtained in China! The other ‘Making Ofs’ are a bit more perfunctory – one being a “Making Of Montage” set to Rage Against the Machine’s ‘Take the Power Back’ (well, I guess it’s better than being played to ‘The Way to Amarillo’). Movie montages are obviously the soup-de-jour as there’s another one (with scenes from the movie) played against the film’s haunting melody ‘Letter from a Private’, as well as the usual trailers and biographies.