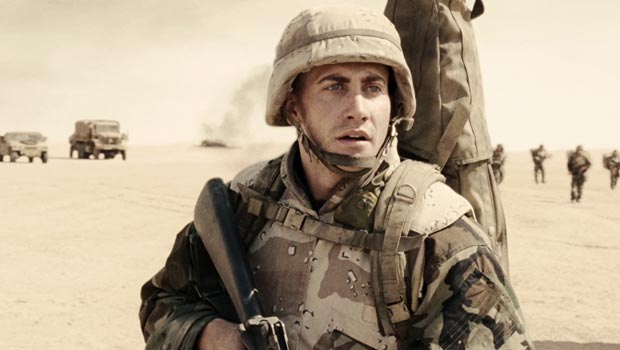 Summary: Jarhead is too tentative to make a bold political statement and not important enough to be placed in the same bracket as the other war movie classics.

I had high hopes for this film as an illustration of the disastrous political landscape caused by the American military’s gung-ho approach to war with little or no forethought for the plight of the ‘enemy’. But instead this film tackles the more personal plight of the marine as a desperate and lonely individual, alienated from the fighting in modern high-tech warfare.

Director Sam Mendes, of American Beauty fame, teamed up with new cinematographer and regular Coen brothers’ collaborator Roger Deakins, to bring Anthony Swofford’s autobiographical accounts of a marine’s life in the first Gulf war to life on the big screen.

We follow the travails of “Swoff” (Gyllenhaal), a third-generation enlistee, from a sobering stint in boot camp to active duty, sporting a sniper’s rifle and a hundred-pound rucksack on his back through Middle East deserts with no cover from intolerable heat or from Iraqi soldiers, always potentially just over the next horizon. Swoff and his fellow Marines sustain themselves with sardonic humanity and playfull comedy. Jamie Foxx portrays staff Sergeant Sykes, a Marine lifer who heads up Swofford’s scout/sniper platoon, while Peter Sarsgaard is Swoff’s friend and mentor, Troy, a die-hard member of STA-their elite Marine Unit.

What permeates this film is a sense of ‘desperation’, on the part of the director to reflect the true frailties of war but without merely mimicking Full Metal Jacket, and in the case of the central characters, known as Jarheads (military parlance for marines), with their itchy trigger fingers desperate to see action in the desert.

One scene, in particular, highlights this position effectively. With orders shipping them out to the Gulf expected any minute, gung-ho Marines pass the time with a rowdy screening of Apocalypse Now, humming along to Wagner and hollering, “Get some!” as the US helicopters bomb the hell out of Vietnam villages.

In his book, Swofford makes it clear that he lusted for action since youth. In the movie Gyllenhaal comes across as a bit of a schizophrenic: one minute he shows a desire for battle, the next he becomes aggressively paranoid, desperate to return home to his loved one.

Like its hero, Mendes’ film remains frustratingly indecisive. Although there are scenes of significance, including a bomb site depicting the charred remains of Iraqi civilians and US fighter jets shooting at their own men on the ground (so called friendly fire), they are not tackled in any great depth or detail and are unable to sustain our interest throughout the entire movie. In the end, Jarhead is too tentative to make a bold political statement and not important enough to be placed in the same bracket as the other war movie classics. It is a half Metal Jacket.