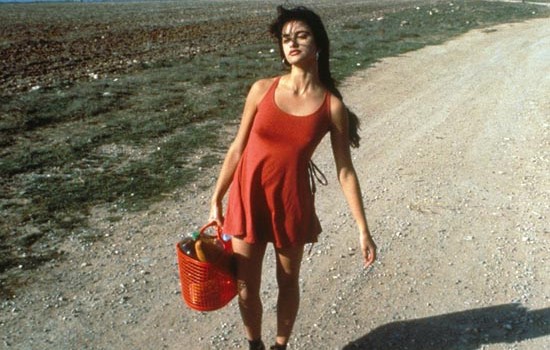 Summary: It’s provocative and hugely entertaining, a highpoint in the blossoming period of 1990s Spanish cinema.

1992’s Jamon, Jamon (‘Ham Ham’) was one of Lunas’ biggest international hits, and it’s not difficult to see why. It’s the story of Silvia (a sparkling young Cruz), a machinist in an underwear factory and daughter of a Madam at a local brothel. Silvia’s boyfriend is the affectionate but weak-willed Jose Luis (Molla), the son of the well-to-do family who own the factory. Their relationship is met with stern disapproval by Jose Luis’s overbearing mother Conchita, who promptly attempts to sabotage the romance by hiring the macho underwear model Raul (Bigas regular Badem) to seduce Silvia. And so the scene is set for an often surprising tale of sex, deception and tragedy.

When the screen isn’t taken up with characters bull-fighting naked or tumbling about in a sleazy motel, Lunas’s film is stuffed with suggestive metaphors like ham, pearls and garlic. It’s often outrageous, but don’t expect a Carry On-style romp. Jamon Jamon explores the different ways in which sex (or sexual situations) can be used – as a weapon, as an expression of love, as a way to fill emptiness or boredom. The film also acts as a telling insight into attitudes towards class and industry in small-town Spain, and charts how prejudice can help wreck people’s relationships with those around them.

Lunas is by turns playful (a close up of lips pressed up against class) and disturbing (a vivid dream of dogs with penises in their mouths), and his confident movie never falters. It’s provocative and hugely entertaining, a highpoint in the blossoming period of 1990s Spanish cinema.

Extras are limited to a trailer, but the film is now available in a remastered set of Lunas’ other works The Age of Lulu, Golden Balls and The Tit and The Moon, all of which are equally recommended.