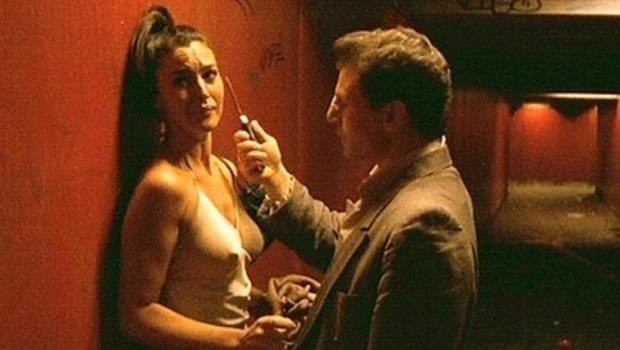 Summary: A lot of people will be disgusted by Irreversible. But this is a bold, brave and important movie.

I’m not exactly a squeamish sort, but Irreversible nevertheless contains the two single most shocking scenes I’ve ever witnessed. Scenes so realistically horrific that they immediately had me quivering in a dark corner with fear and sickness.

The key question with a film like this is whether the violence is necessary or whether it’s simply exploitation to attract attention. But it’s worth remembering that Irreversible is much more than the sum of its two most talked-about sequences.

The story of a violent rape in a subway and the subsequent quest for revenge is framed in a series of scenes in reverse chronological order. This means that the viewer is plunged almost immediately into the horror of the situation at the start, while the film ends strangely optimistically – although the fact that you know what will eventually occur means that it’s unlikely anyone will be walking away from this film in buoyant spirits.

Like the best directors who play around with time structures (such as Gus Van Sant with Elephant), Noe is able to imbue the events with a fatalistic inevitability, and eerie premonitions haunt the latter half of the movie. The time structure also hints at the horrific nature of causality and shows just how easily happiness can be stolen away. Irreversible’s final line (and the film’s original title) sums up the film’s bleak message: “Time Destroys All Things.”

Visually this is a film that could give weak-willed viewers motion sickness. Yet Noe has created a highly original filmic style, with cameras (sometimes handheld, sometimes on cranes) that see-saw around characters, in and out of windscreens and around apartment blocks. Each segment is shot in what are apparently single takes, but (as the SFX documentary on the DVD shows) there’s been a lot of manipulation to achieve this effect. Particularly impressive are the first 20 minutes of the movie in the Rectum nightclub, the screen overwhelmed by red lights, discordant sounds and characters whirring in and out of frame. It’s a bold and bizarre sequence that breaks down any norms of cinematic conventions.

Noe creates a disturbing and original movie from the offset, with the barely readable credits flowing backwards – as Noe reveals in the commentary, his aim was to ensure that the credits became an important part of the movie. Noe’s direction is backed up by edgy and brave performances from Belluci, Cassell and a horrific Jo Prestia as the rapist (nicknamed ‘Le Tenia’ – or Tapeworm), all of whom conspire to make Irreversible such gripping, uncomfortable viewing.

But back to the key scenes – the violent, self-defeating act of revenge and the rape. Necessary or gratuitous? I would argue that these scenes are so horrifically convincing that they become virtually impossible to watch, and this is the effect that violence should have. Both acts are also integral to the story. This isn’t the ridiculous-but-fun violence of Hard Boiled or the sanitised treatment of rape in The Accused. Instead these are shown for the barbaric, soul-destroying acts that they are.

A lot of people will be disgusted by Irreversible. But this is a bold, brave and important movie, and it is one that anyone who makes it through to the end will never forget.

Irreversible is one of those movies where you desperately need to know what the director was trying to achieve, and luckily Noe’s commentary is literate, enlightening and occasionally bizarre (such as Noe pointing out his appearance as an extra in The Rectum trying to get an erection).

There are also some fascinating documentaries including one on the film’s special effects and digital manipulation (even when you learn how they achieved it, the fire extinguisher bashing doesn’t become any easier to watch), some Daft Punk videos and a Noe’s short film ‘Intoxication’.