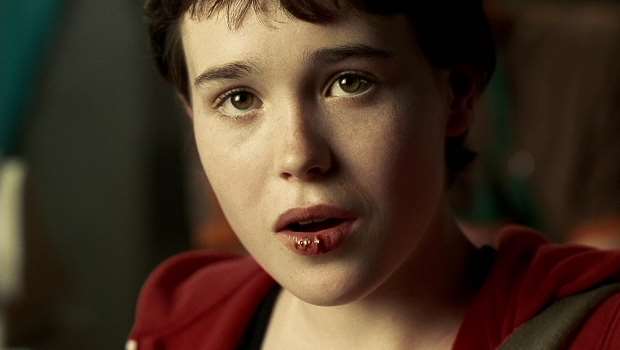 Summary: Maybe not an ideal film for a first date, but if you’re having a bad week, Hard Candy will make you feel so much better.

Hayley is a pretty, intelligent 14-year old, who like most American teenagers spends quite a lot of time online. She’s been chatting – flirting – for a few weeks now with a guy called Jeff, and they agree to meet IRL. In a coffee shop, Hayley is surprised and pleased that Jeff, a 32-year old photographer, is attractive and charming, and the two get along famously. Hayley seems like a typical precocious teenager, giggly and pleased with the attention from a good-looking older guy, occasionally awkward, sometimes outrageous.

Hayley wants to go to Jeff’s house – he has a bootleg MP3 of the Goldfrapp concert that she’s dying to see. When they get to his home – a lovely house in the hills overlooking Los Angeles, walls lined with his work (shots of nubile teenagers) – she breaks out the vodka and asks him to take her picture. They talk about his work, flirt some more… and then Jeff starts to feel queasy, faint, and passes out. When he wakes up, its clear that playtime is over.

For Hayley is, in fact, a sort of self-appointed vigilante – determined to avenge and protect every child, every girl who has ever been abused – and she has plans for Jeff that will ensure that he never approaches a girl again.

I liked Hard Candy a lot. It’s sometimes difficult to watch – even to listen to at points! – but it is clever, provocative and extremely well-acted by the two leads (Sandra Oh’s role is a cameo; the other characters barely speak). Most of the film takes place in Jeff’s house, with the two characters taking it in turns to be prey and be preyed upon. Their relationship, twisted as it is, is like parasite and host, they need each other in some horrible way. We never know why Hayley is so bound on revenge – we never find out if she even knows the girl she claims Jeff has killed. She’s like a really dark version of Buffy – without the vampires, what is the Slayer? Just another teenage girl.

The question of Jeff’s guilt is cleverly left open, so that there are points where you begin to doubt Hayley’s story. He seems so nice, reasonable – likeable even – yes of course he occasionally finds one of the underage girls who model for him attractive, but that doesn’t mean he acts on it. It’s a dilemma most people can relate to – we’ve all been tempted to do something that we know is wrong. And the definitions of right and wrong are blurred and socially determined – in the Middle Ages, Jeff’s desire for pubescent girls would be perfectly normal; having just googled ‘age of consent’ it would be legal for Hayley to have sex in a number of countries including Albania, Austria, Hungary, Iceland and Italy – or in South Carolina. Of course this is not to condone Jeff’s predatory behaviour – his desires, it becomes clear, are perverse – but to try and set within some sort of context.

Both the leads acquit themselves with aplomb. Patrick Wilson is excellent as Jeff, turning in a subtle performance that has to shade from confident charmer through to snivelling weasel while being put through all sorts of unpleasant physical experiences, But the real revelation is Ellen Page, simply superb as Hayley. Still only seventeen, she is absolutely perfect. Terrifyingly matter-of-fact while wielding her scalpel, she monologues like the best supervillains and delivers her lines with wickedly dry comic timing. And for all the seriousness of the subject matter, the film is funny. Sick, but funny. It needs to be – as Shakespeare knew, audiences need relief from this kind of tension.

If I had a criticism, its that the running time is slightly too long and the action becomes a little repetitious by the end. Maybe not an ideal film for a first date, but if you’re having a bad week, Hard Candy will make you feel so much better…