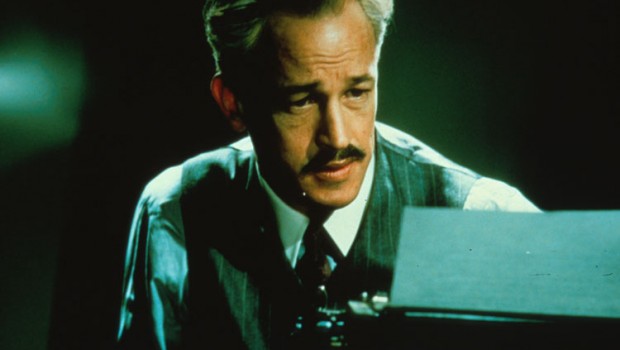 Summary: A revisionist noir that gets by on its eyepopping period detail and charming paperback hero.

Wim Wenders’ first Hollywood outing after such Euro-hits as The American Friend and Kings of the Road is a colourful and convoluted love letter to detective fiction that spins an elaborate yarn about one of the genre’s most seminal authors, Dashiell Hammett.

Set in the San Francisco of 1928, a powdered-haired, moustached Frederick Forrest plays the ex-private eye turned crime writer. Hammett’s daily routine of writing, drinking and collapsing from TB-induced coughing fits is interrupted by a visit from his old Pinkerton pal Jimmy Ryan (Boyle) – the inspiration behind many of his detective heroes. Jimmy wants Hammett to help him track down a missing Chinese cabaret star named Crystal Ling (Lei), and Hammett duly obliges. But it turns out Jimmy isn’t the only one looking for Crystal. And so begins a typically labyrinthine, though often light-hearted, noir mystery that takes in pornography rackets, Chinese gangsters and the city’s elite – all of which provides good inspiration for the writer’s later novel The Maltese Falcon.

At times, Hammett recalls another revisionist noir from a Euro director set in a Californian Chinatown; yet it lacks the depth, dark heart and super-sharp dialogue of Polanski’s masterpiece. Nevertheless, there’s plenty to enjoy here. Wenders and cinematographer Joseph F. Biroc stylishly recreate a bustling, larger-than-life San Fran in a film that’s part shadowy noir and part colourful character study. And Forrest is great in one of his best-known roles (he would revisit Hammett again 10 years later in Citizen Cohn), playing the writer as a more affable, less gruff version of his detective creations who seems to know everybody in the city by name.

Sadly, the rest of the cast – including Marilu Henner as Hammett’s neighbour Kit and Eraserhead’s Jack Nance as weasley pornographer Salt – aren’t given nearly enough to do, though Roy Kinnear is fun in his brief role as wealthy, rotund gangster Eddie Hagedorn (seen here as the inspiration for The Maltese Falcon’s Kasper Gutman).

The narrative, meanwhile, is confusing and often disjointed: you could level the same accusation against John Huston’s version of The Maltese Falcon (and most people do), but Huston’s movie moved so fast, propelled by thrills, whipcrack dialogue and sexual heat, that you didn’t give a damn. Here, the languid pace works against the drama. By the end, you don’t especially care who did what to who – never ideal in a mystery thriller. It’s no surprise to find this was a troubled shoot: the script constantly altered during filming and the movie was extensively reshot with extra action shoehorned in.

Wenders’ made-up biopic isn’t one of his most beguiling pictures, then. But it gets by on its eyepopping period detail and charming paperback hero, and makes for an interesting double-bill with The Maltese Falcon.