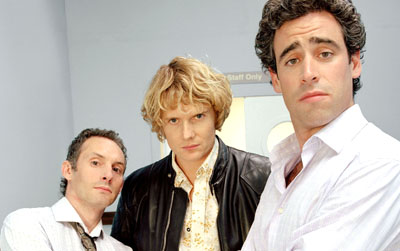 Summary: If you loved the series then this Special (quite possibly the last-ever episode) is essential viewing.

Green Wing is a show that permanently walks a tightrope between genius and irritating. The surreal hospital-set sitcom lays on the visual ticks and bewildering diversions so thick and fast that it can become a little wearing after a while. Thankfully it’s such a unique and frequently hilarious show that you can forgive any tendency towards self-indulgence.

This feature-length special picks up from where the second series left off. Dr Caroline Todd (Greig) is now improbably engaged to the cynical, self-obsessed Guy Secretan (Mangan). But Caroline is still in love with Mac (Rhind-Tutt) who, she soon learns, is dying. Meanwhile neurotic oddball Alan Statham (Heap) and sour-faced Joanna (Haywood) are attempting to lay low by travelling around the country in a beaten-down camper van. Mostly bored and miserable, it’s not long before events descend into unarmed robbery and an assault with a peanut butter sandwich.

Green Wing borrows a little from Jam and has a dash of Python in there, but it remains one of the most original sitcoms in years. The writers have fashioned a strange world that’s a lifetime away from conventional sitcoms, yet still retains a core of characters that you can genuinely care about (or detest in the case of Secretan). British comic stalwarts Mark Heap and Pippa Haywood are particularly inspired as the mismatched couple on the run – it’s enough to make you forgive Haywood for appearing in The Brittas Empire for so long.

Green Wing always seemed a bit too much to take over an entire hour-long episode, and this hour-and-a-half special suffers from the same problem. It appears to be part of an attempt to marry some of the trappings of a conventional drama to that of sitcom, but this is a show that is so relentlessly hyperactive that you can’t help but feel it would have worked better in half-hour bursts.

But never mind. Green Wing is a very funny show that’s prepared to take risks, even if it is mostly baffling (an example? How about staff liaison officer Sue conducting an interview while being inexplicably dressed as a squirrel).

If you loved the series then this Special (quite possibly the last-ever episode) is essential viewing, not least as it actually moves the plot forward. And if you’ve never had a chance to catch Green Wing before, go back to the start. It’s better than Doctor in the House.

Cast and crew speak candidly on both the Behind the Scenes doc and commentary. Plus there’s a ridiculous number of deleted scenes and an alternative ending.