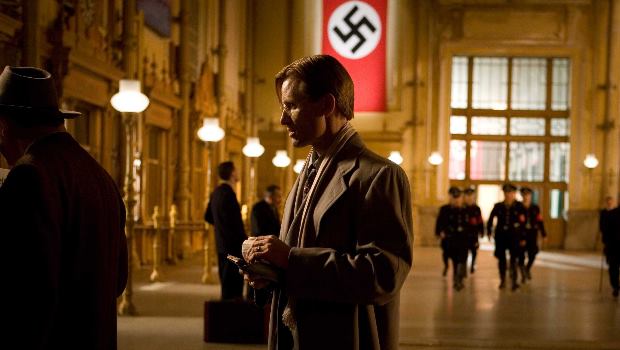 Summary: Despite a small budget, the film looks great and the performances from Mortensen and Isaacs are excellent.

In the worst of times, most of us will prioritise self-interest, with only a heroic few possessing the courage to swim against the tide.

Good is less a film than a filmed parable of this fact, continually betraying its stage origins and relying on the horror of the Holocaust to imbue its mediocrity with a gravitas neither Vicente Amorim’s direction nor John Wrathall’s stilted screenplay deserves.

Based upon C.P. Taylor’s acclaimed play, Good opens in the Berlin of the 1930s and traces the moral descent of literature professor John Halder (Viggo Mortensen), a meek, decent man caring for his ailing mother while enduring a failing marriage.

Unwilling to join the Nazi party, he nevertheless attracts their interest. The Führer himself is impressed by a novel Halder has written – partly inspired by the burden of dealing with his mother’s dementia – which explores the possibility of merciful euthanasia. The Nazis request that he draft a paper outlining justification for human extermination, which he does, failing to comprehend that he’s supplying a blueprint for the Holocaust.

Despite his initial reservations Halder finds his stock rising with high ranking Nazi officials, most notably slick SS officer Freddie (Steven Mackintosh) and he leaves his family for one of his students (Jodie Whittaker). He wrings his hands about whether to succeed within an establishment he disagrees with or suffer the consequences for his security and ambition that shunning the government would entail.

Nevertheless, Halder remains staggeringly deluded and naive. Though hindsight is a wonderful thing, whenever the professor tries to reason with his Jewish friend Maurice (Jason Isaacs) that Hitler’s reign is a passing fad, the viewer instinctively shares Maurice’s incredulous anger. Halder fools himself long beyond the point of believability. That an intellectual could be so well connected and yet remain so oblivious to the real intentions of his political masters strains credibility.

Still, despite a small budget, the film looks great and the performances from Mortensen and Isaacs are excellent, the two matching each other scene for scene in anguish and fury. Amorim’s use of absurd sequences and music to convey Halder’s disorientation is interesting if not always successful, exemplified by the film’s shocking final five minutes.

Ultimately though, the compelling premise behind Good is undermined by a central character that doesn’t represent the film’s general idea – Halder is less morally compromised than implausibly ignorant.