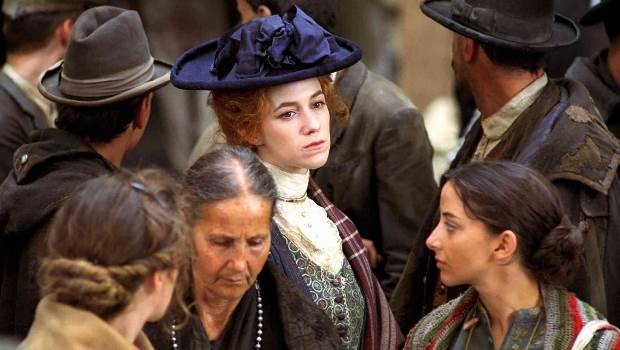 Summary: The film is a dreamy fable of immigration, languidly shot, visually striking.

Golden Door or, translated from the Italian, New World, is the story of Sicilian immigrants who effectively travel from the past to the future by crossing the Atlantic to reach America. Sicily is a desolate, desiccated, barren land, where the peasant families have farmed for generations. Their daily lives are monotonous, their living conditions little better than those of their livestock.

Salvatore (Amato) makes the momentous decision to sell the little he has and set sail for America, the fabled land of milk and giant carrots. He and his family – his two sons and aging mother – travel across the island from their tiny, dirt-poor village to the port where they will embark for the New World. Thus their story is divided into three acts; the departure, the journey and the arrival, where the sheep will literally be separated from the goats and only those fit to enter the promised land will be allowed to pass.

The film is a dreamy fable of immigration, languidly shot, visually striking. A particularly beautiful image is that of their ship drifting away from the dock; shot from above, the crowd seems to part and then you realise that it’s the crowd on the deck, gradually splitting away from those who remain on the dock. The life they have left behind is all superstition, an almost medieval existence. Now they must journey into the abyss – the steerage conditions are little better than those of the infamous middle passage of transatlantic slave trade, but these people have paid for their tickets.

An anomalous figure who soon catches Salvatore’s eye is the mysterious Lucy (Gainsbourg). English-speaking and educated, we never quite find out what she is doing in steerage, and the arranged marriage between her and Salvatore fails to convince. It’s hard not to think that she has been added to the film to increase its appeal to an English speaking audience; despite her status as love interest, she brings little to the story, other than being some sort of symbolic link between the old world and the new. Far more interesting are the cast that Crialese has assembled; much like Inarritu in Babel, he has managed to find some arrestingly wonderful faces among the extras and gets a fine, powerful performance from Vincenzo Amato’s as the brooding paterfamilias.

Most interesting perhaps are the scenes of arrival in America, the emigrants herded like cattle into the ‘Island of Tears’ – Ellis Island – where they are inspected by naval personnel. Inspected for signs of disease or disability; any imperfection that would stop them being a useful citizen of their new country was recorded, and these people would be sent back. The physically sound were subjected to intelligence and aptitude tests – puzzle solving and the like – the first systematic eugenic studies. These modern puzzles, so simple a child could do them, are perplexing for the immigrants; their first shower, after weeks in the smelly hold of the ship, is blissful.