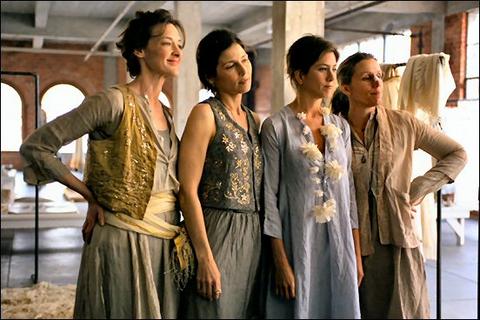 Just when did the polished Hollywood ‘chick flick’ of old begin to appropriate the stylistics of the indie film? It’s difficult to pin-point the exact moment, although the risqué subject matter of Sex in the City (of which director Holofcener directed several episodes) along with the grainy aesthetics of Stephen Soderbergh’s Erin Brockovich may have played a part. But in Friends with Money we have a perfect example of a film that blurs the traditional mainstream/indie divide, and comes complete with minimalist title sequence, handheld camera work and a narrative that mostly resists plot resolution. All of which, combined with some sharp writing, works in Friends with Money’s favour, resulting in a surprisingly enjoyable movie.

At the centre of the film are a band of LA couples who, despite their obvious affluence, are plagued by an assortment of hang-ups and problems that stop them ever being truly happy. Jane (McDormand) is possessed by a newfound rage against the world as she approaches middle age, spending a large portion of her days ranting about the petty annoyances around her. Jane is also married to Aaron (McBurney) – a man who, as her friends whisper to each other, is “obviously gay.” Christine (Keener) and David (Isaacs) are a married couple who co-write stories about fictional counterparts while their own relationship disintegrates. Franny (Cusack) is desperately insecure and married to Matt (Germann) who can’t quit smoking. And finally there’s Olivia (Aniston). Olivia is a single, semi-withdrawn pothead who earns a living cleaning wealthy people’s houses, and who just can’t seem to get over a man with whom she recently had a fling.

Okay, so Friends with Money is essentially about self-absorbed wealthy socialites moaning about their pampered lives. Your sympathy towards Aniston’s ignominy of having to work as – shock horror! – a cleaner may well be limited, and the ending suggests that if money doesn’t buy happiness it can certainly help.

Yet somehow Friends with Money remains unpatronising and rarely grates. After all, just because these people don’t reside in the slums why shouldn’t we get to witness their problems? Aniston (whose character is strangely younger than her pals) may not be everyone’s first choice for a downtrodden cleaner but, as she previously demonstrated in The Good Girl, she is capable of offering up a quiet, downplayed performance almost as good as her comic roles. Aniston is surrounded by some assured playing from a talented ensemble of actors who help propel a nicely-balanced number of amusing and poignant subplots. The most entertaining of these sees Aaron venture on a number of resolutely platonic ‘dates’ with another apparently gay married man named Aaron (played by Dawn of the Dead’s Ty Burrell), the duo managing to find a rare connection in their hectic, confused lives.

Despite the indie sheen Friends with Money is still an essentially lightweight comedy-drama along the lines of Crush or How to Make an American Quilt. But it’s tightly scripted, well acted and mostly avoids sentimentality, making it one of the best movies of its kind in the last couple of years.