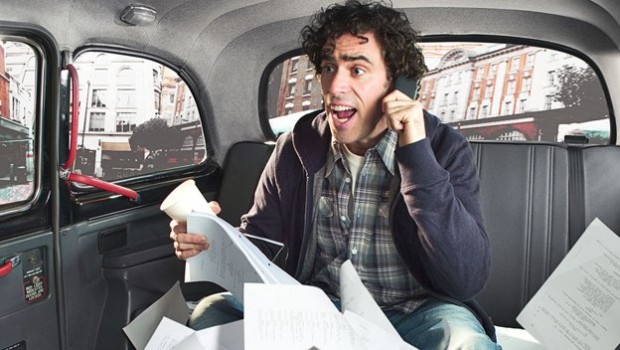 Summary: It’s difficult to imagine a better new sitcom in 2009.

Though Free Agents is unmistakably a sitcom, at times it is almost relentlessly bleak. Most episodes feature one, if not both, of the lead characters uncontrollably weeping, and all of the lives presented here are empty, soulless and ultimately pathetic.

The series centres on a group of emotional screw-ups who work for a talent agency housed in a sterile London office block. The agents chase down leads at funerals, despise the majority of their clients and, for the most part, have nothing in common with each other.

At the forefront of these agents are Alex (Stephen Mangan), an emotionally fragile walking disaster whose separation from his wife and kids has left him homeless, and Helen (Sharon Horgan), who is trying to come to terms with the death of her beloved husband with the aid of copious amounts of alcohol.

Episode One opens with the two of them having sex – climaxing in Alex bursting into tears – and, over the course of the subsequent episodes, their friendship develops while Alex periodically tries to convince Helen that they should embark on a relationship. Alex comes across an old girlfriend on a dating site and stalks his ex-wife and kids in a park. Helen has a drunken one night stand with an egotistical salsa-dancing extra from Casualty. Their lives rarely become any less bleak or meaningless.

Over the course of the six episodes here, Alex and Helen do grow on you thanks to Mangan and Horgan’s pitch-perfect comic timing, even if their roles aren’t a million miles from their roles on Green Wing and Pulling respectively. Despite their emotional problems, foul language and general negative outlook, there’s something sympathetic about the way their lives resolutely refuse to improve, and they do at least have some humanity. Stephen is a far less likeable prospect, but Anthony Head has a blast with a character who encourages his staff to reveal their recent sexual encounters in the boardroom and uses a dildo as a whisk.

Thanks to its cast and sharp script, Free Agents is often very funny indeed. But it’s a difficult sitcom to really fall in love with. From the overlit offices to the wilfully profane dialogue, the world here is shallow, bitter and cold-hearted, and there is little of the likeability of something like the equally close-to-the-bone Peep Show.

But then Free Agents is as much concerned with attacking (and exaggerating) both the vapidity of the publicity industry and an unforgivingly lonely London as it is in making us laugh. It can be a bitter pill to swallow sometimes, but it’s difficult to imagine a better new sitcom in 2009.

Skip the typically unfunny outtakes and perfunctory ‘making of’, and head on to the ‘Features’ which contain amusing, in-character scenes with Alex and co revealing why they became agents, while Stephen gives us a tour of his home. Best of all are the improvised scenes: Holness and Pascoe actually flesh out their sketchy characters with some very funny phone exchanges, while Mangan offers up a stream of hilarious ad-libs about debauched sexual encounters: “She made me weary a nappy!” “She made me eat bees!”