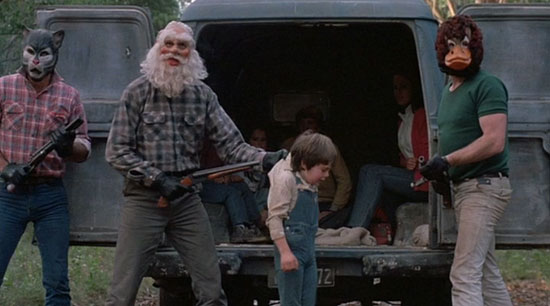 Summary: A strange and sometimes sinister antidote to US thrillers of the same period.

There’s been a renewed interest in ozploitation movies in recent years. This is partly down to the widespread critical reassessment of grindhouse cinema in general, partly due to the re-emergence of low-budget Australian genre films, and partly due to the warm reception that greeted Mark Hartley’s excellent documentary Not Quite Hollywood (which invented the ‘ozploitation’ moniker).

1986’s TV movie Fortress wasn’t one of the films mentioned in Not Quite Hollywood (though director Arch Nicholson’s crocodile thriller Dark Age did make an appearance), but it’s a good representation of everything great about Australian exploitation – not least the way it straddles genres. For this is a film that is as much children’s adventure flick as it is violent crime drama.

The premise is basic: Rachel Ward’s prim teacher Sally and her class of outback kids are taken hostage by a band of masked bank robbers, and are forced to fight back. Yet it’s much more than that. The kidnap sets Sally and her squabbling class off on a series of unpredictable, oddly structured adventures, and as they escape through cave systems, become embroiled in new danger and hole up in a trap-filled “fortress” on a hill, you’re never quite sure what’s going to happen next.

The baddies – whose incongruous masks (including Santa and Dabby Duck) make you wonder if Kathryn Bigelow and W. Peter Iliff saw this before they made Point Break – are a remorseless, nasty bunch with no redeeming qualities. In one of the film’s most chilling scenes they taunt “Miss” with threats of rape and murder as they hide unseen in the forest. Danny Beckermen’s atmospheric score, which mixes keyboards, atonal noises and the sound of wildlife, also adds an extra menace to proceedings, whether what’s happening on screen is nasty or benign.

Really, though, this is an age-old Wild West story of the clash between civilisation (represented by city girl Sally and the order she imposes on her class) and the wilderness (represented not only by the feral criminals, but by the way farm kid Sid understands the land, and by the beautiful but harsh landscape itself). Ultimately the wilderness wins: words and reason become meaningless, and violence and ancient tribal customs are seen to save the day.

In the background, there is a coming-of-age story of awakening sexuality, as Sid watches uncomfortable and entranced as his teacher strips before him to swim across a pool, and teenager Narelle notices her body changing and nervously asks Sally what the men might do her – a fear which sends her scurrying off into the undergrowth in panic.

Nicholson’s film certainly isn’t slick; some of the dialogue and performances fall flat, and there are moments of all-out silliness. That in itself has always been part of the charm of exploitation films. But there’s also an unusual realism to the way the children moan and bicker as their teacher desperately tries to maintain calm. These aren’t a collection of superhuman kids, but just a typical class – as annoying, forgetful and uncomprehending as they are brave.

Fortress , like other films of its ilk, retains an appeal because it feels like a testament to a certain place at a certain time. From the rough and ready vernacular (“Ripper!”) to the bleakly stunning scenery, it’s a strange and sometimes sinister antidote to US thrillers of the same period.