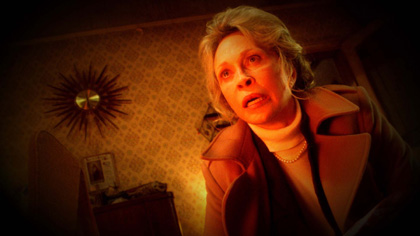 Summary: The smart visuals can’t quite compensate for this lack of substance, but it certainly suggests bigger and better things for David Howard.

This offbeat British horror-comedy is perhaps best described as Sin City meets Prom Night II. It’s a lively mix of comic book conventions, slasher tropes and rockabilly songs, and though it doesn’t always work, it certainly stands out from other direct-to-DVD offerings.

Our story begins in 1960. Bullied Teddy-boy Johnny ‘Flick’ Taylor (Hugh O’Connor) saunters into a local nightclub in the hope of securing a dance with his beloved Sal. But before long things have turned ugly. Johnny is beaten up by local meatheads, sending him into an uncontrollable rage. He stabs a couple of them, speeds away in his automobile – and crashes into a river. 40 years later Johnny reawakens, and sets about taking bloody revenge on those who once mocked him. Johnny also hopes to steal a kiss from (the now 62-year-old) Sal so he can finally rest in peace…

It sounds like standard slasher stuff and in narrative terms it is. But the real appeal here is in the eye-popping visuals. The opening 60s-set scenes are shot in nostalgic sepia with splashes of CG claret, while the contemporary sequences are overflowing with colourful costumes, wacky framing and neat visual tricks (like the use of 40s-style back projection or the musical notes that drift across screen whenever the pirate radio station blasts out rock ‘n’ roll). Like Sin City, the movie feels like the pages of a pulp comic sprung to life, and linking sections are actually constructed of fun comic book panels. The budget of Flick is, of course, only a fraction of that of Sin City, and director David Howard has done wonders with the limited resources at his disposal.

You have to assume that much of the budget went on securing Faye Dunaway for the role of a one-armed cop on the trail of the killer, who teams up with Mark Benton’s local detective. Their subplot draws on classic noir cliches as they gradually uncover the truth behind the zombie Teddy-boy, but their pulpy exchanges lack much in the way of chemistry or comic timing.

As you’ve probably guessed, Flick doesn’t have pretensions of being a movie of any real depth, but the gentle spoofing of slasher and cop conventions rarely generates belly laughs. And though the script is deliberately trashy, there’s a distinct lack of the memorable dialogue that the likes of Tarantino and Robert Rodriguez have made their trademark. The smart visuals can’t quite compensate for this lack of substance, but it certainly suggests bigger and better things for David Howard.

The film is also carried by its nutty charm, helped in part by a winning British cast that includes Michelle Ryan, John Woodvine, the late Terence Rigby and the ever-wonderful Liz Smith as Johnny’s doting mother. And as the undead killer, Hugh O’Connor (The Young Poisoner’s Handbook) has a captivating mix of the vulnerable and the crazed, making him a deeply unconventional bogeyman. Best of all, the film features a great rockabilly soundtrack from bequiffed singer-songwriter Richard Hawley. Hawley also pops up in a cameo as a pirate radio DJ, though his skills as a thespian are rather less impressive.