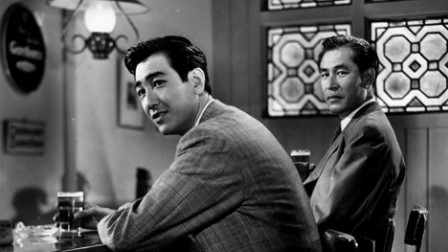 Summary: Flavour of Green Tea Over Rice is the very definition of timeless filmmaking, and it's difficult to imagine a more immediate, honest movie even with today's cinema-verite stylistics and improvised acting styles.

Yasujiro Ozu’s movies sound infinitely tedious to describe. Not a lot happens. There are no big set-pieces. They come saddled with titles like ‘Flavour of Green Tea Over Rice’. Yet Ozu remains one of the unquestionably great directors of the 20th Century, and every moment of this classic from 1952 is a joy to watch.

Flavour of Green Tea Over Rice is essentially a study of a marriage mired in stalemate. Mokichi (Saburi) and Taeko (Kogure) are a married couple with few kind words to say to each other when they say anything at all. Taeko lies to her husband to sneak off for a few days at a spa with her friends, deriding Mokichi as “dull-san” behind his back. Dull-san himself, perpetual bedraggled look on face, spends his entire waking hours either at the office or killing time in the local arcade with a young friend. Meanwhile their niece Setsuko (Tsushima) recoils in horror when she learns of an impending arranged marriage that her parents have prepared for her, and swiftly becomes determined not to end up like her unhappy aunt and uncle.

Yup, it’s difficult to imagine Flavour of Green Tea Over Rice sounding any drearier. Yet Ozu’s eye for the intricacies of human behaviour is second to none, every frame and every line brimming with a universal honesty about relationships and the slow trickle of life. Ozu doesn’t go in for the stylistic or narrative trickery of his most celebrated contemporary Akira Kurosawa, but his lengthy takes and naturalistic dialogue have been almost as influential on a new generation of directors including Mike Leigh and Wim Wenders.

It goes without saying that the acting is flawless throughout, Saburi’s ingrained forlorn expressions and Kogure ‘s depiction of a woman determined to steal a little joy from life managing to create an entirely believable study in wedlocked gloom. The supporting roles are no cardboard cut-outs either with a memorable gaggle of characters like the war veteran arcade owner and Taeko’s upbeat girlfriends. Everyone has something touching or amusing to say, but the movie maintains a feeling of being entirely natural and unscripted.

The themes may sound downbeat but Flavour of Green Tea Over Rice is far from a portrait in misery; the film overflows with humour and optimism. The little moments count for everything here. From Taeko and her friends comparing their husbands to fish to Setsuko’s stubborn refusal to attend a date with her husband-to-be, it is impossible to watch this film without a mile-wide grin on your face half the time. Ozu essentially sees the good in people however they might at first appear, and the conclusion points to a hope for a new generation less slavishly tied to tradition or beaten down by memories of war.

Flavour of Green Tea Over Rice is the very definition of timeless filmmaking, and it’s difficult to imagine a more immediate, honest movie even with today’s cinema-verite stylistics and improvised acting styles. Essential.

Part of the two-movie Ozu boxset Volume 2 along with the almost-as-impressive Record of a Tenement Gentleman, the film doesn’t have an extensive selection of extras it has to be said. You get a few stills from the film, a brief feature on how it sounded before and after the audio restoration and, well, that’s it. But then the chance to watch a masterpiece like this with digitally remastered audio and picture should be temptation enough.