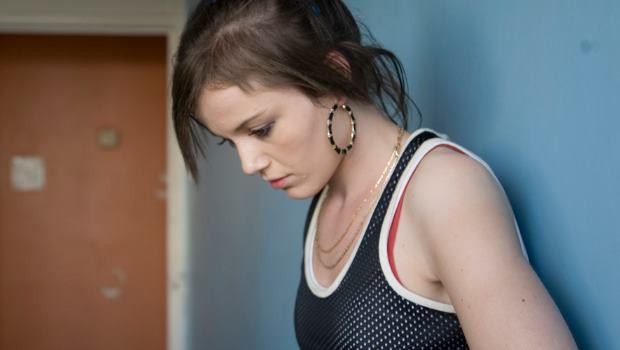 Summary: The beauty of the film’s composition is almost overwhelming at points; unlike so many British directors, Arnold has a large cinematic vision that sets her apart as a real artist.

Mia is a 15-year old council estate-dwelling girl with a short temper, a fractured relationship with her mother and a cider-drinking younger sister who knows far too many swear-words for her own good. Her only escape from this thankless existence is to retreat to an abandoned flat whenever possible and lose herself in hip-hop dancing. I’m pretty sure I wouldn’t naturally go out of my way to spend two hours with a girl like Mia, but thankfully, Andrea Arnold decided she wanted to. In doing so she’s made not only a brilliant and beautifully bruised character study, but also arguably one of the best films of the year.

The plot is a slight thing – it is more a film about being than doing – but the central event is the arrival of Connor (Michael Fassbender), the new man in Mia’s mother’s life, and the impact that he has on the impressionable and insecure Mia. From the moment that she encounters Connor half-naked in the kitchen, the film becomes electrified by an escalating sexual tension. Connor does nothing to defuse it, Mia doesn’t quite know what to do with it, and we know that it must lead somewhere, and it won’t be good.

Mia is played by newcomer Katie Jarvis in her first ever performance, and she demonstrates a natural ability in front of the camera. Her unselfconscious openness to Arnold’s camera draws us in to Mia’s confused life and worldview, so rather than watching from a distance and judging her, we live these moments alongside her. Fassbender, recently so brilliant in Inglourious Basterds, is also fantastic here in a totally different role. Initially he’s all effortless charm and knowing, but that is undercut by hints of insecurity that only become more pronounced as his character’s secrets are revealed.

Arnold excels at creating tension using little more than naturalistic performances and precise camera movements, and in Fish Tank, just as in her Oscar-winning short film Wasp, it is the sense that some terrible event is always just around the corner that most strongly pervades the atmosphere. The effect here is to believably convey the fragility of any peace that the characters may find, and it lends an almost tangible intensity to much of the film.

But while Fish Tank is certainly dark, it is not all-pervadingly so. Arnold is as interested in life’s beauty as its struggles, and captures some truly transcendent moments – an impromptu dance to James Brown on a sunny afternoon; the oddly beautiful sight of a horse in an abandoned wasteland – with the assistance of her cinematographer Robbie Ryan. In fact, the beauty of the film’s composition is almost overwhelming at points; unlike so many British directors, Arnold has a large cinematic vision that sets her apart as a real artist.

If the film has one flaw, it’s the occasional weak plotting, which is only noticeable because the characterisation is so strong. When your lead character is so brilliantly realised it’s harder to get away with lapses in story logic, and this becomes apparent in a certain course of action Mia takes towards the end of the film. This is no slight on Andrea Arnold’s excellent achievement here though, and emphasises how strongly Fish Tank succeeds on every other level.