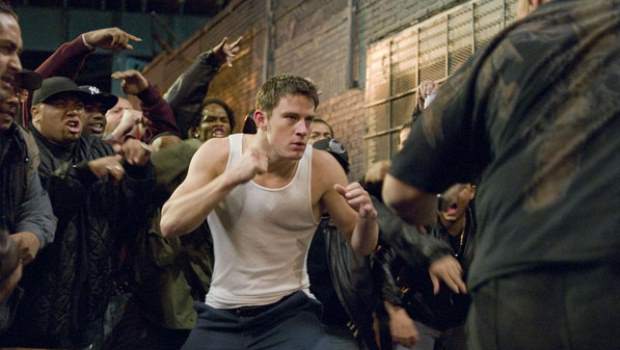 Summary: Montiel adroitly conveys the fights’ brutality, in marked contrast to the languid regard he has for the rest of the narrative.

As the title suggests, Fighting is a straightforward film of few surprises and a raw, if intermittent, energy.

Director Dito Montiel’s low-budget debut, A Guide To Recognising Your Saints, was a compelling account of the writer-musician’s adolescence in Queens, New York, and he transfers all of that film’s scrappy intimacy and his affection for the city into Fighting, a cluttered, street level portrayal of hustlers struggling to make a living.

Channing Tatum got his big break in Saints and the star of the forthcoming G.I. Joe brings a buff physicality to Fighting which, though completely unrealistic for a street hustler, does at least make him look the part when he’s in a brawl.

Tatum plays Shawn, an ex-college wrestler from Alabama who’s wound up in New York trying to flog counterfeit Harry Potter books on the Manhattan sidewalks. When some of his merchandise is stolen, he smacks seven bells out of his assailants, impressing the watching Harvey (Terrence Howard), a ticket scalper-cum-illegal fight promoter.

Befriending Shawn with the promise of easy money in the underground fighting game, Harvey introduces him to some shady acquaintances, including the sleazy Martinez (Luis Guzmán) and the sinister Jack (Roger Guenveur Smith). Before long, Shawn is trading blows and butting heads with hardcases across the city – Russians in Brooklyn, Hispanics in the Bronx and Chinese in lavish gambling dens. He falls in love with a nightclub waitress (Zulay Henao), tests his friendship with Harvey and winds up facing off against an old adversary from his college days (Brian White) in a high stakes match-up atop a luxury Wall Street apartment.

His pugilistic prowess remains questionable, variously relying on explosions of rage, luck and in one confrontation, even fleeing the scene when the crowd turns ugly. Still, Montiel adroitly conveys the fights’ brutality, in marked contrast to the languid regard he has for the rest of the narrative. Rarely has a film about chancers chasing a big payday seemed so relaxed about the money or the threat of a nemesis seemed so unthreatening.

It doesn’t help that the two leads seem to be in different movies, with Howard imbuing Harvey with somnambulistic, muttering depth as the film predictably winds towards its conclusion. Montiel is in no rush to tell his story and Fighting flirts with various clichés. Yet the director isn’t even concerned about following these through, ensuring that the film never builds up a head of steam.