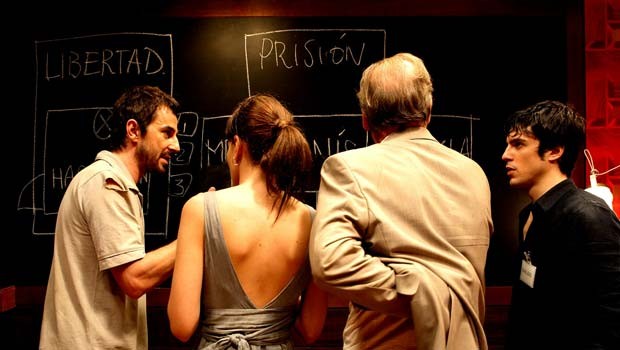 Summary: This is Piedrahita and Sopeña’s film debut, but they handle their well-constructed script with confidence and control, and the result lives up to its promise as a hugely satisfying puzzle-filled thriller.

Ron Howard could learn a thing or two from Luis Piedrahita and Rodriga Sopeña, co-writer/directors of this engrossing number-crunching thriller. With a brisk running time, tight characterisation and a series of puzzles that cinema audiences can attempt to solve along with the characters, Fermat’s Room succeeds on every level that Howard’s Angels and Demons (and even more so The Da Vinci Code) failed.

The story concerns four mathematicians (Santi Millán, Lluis Homar, Federico Luppi and Elena Ballesteros), each at different stages of their lives and careers, who are individually invited to gather at a remote location where, they are led to believe, they will work together to resolve ‘the greatest enigma ever’. They are each assigned codenames, and their host signs off with the pseudonym ‘Fermat’. Finding a PDA holding further directions at the designated location, the group make their way to the mysterious room of the title, but shortly after their arrival events take a sinister turn. It becomes clear that they have been led into an intricate trap; the room is shrinking, its walls slowly closing in, and the four must solve a series of logic enigmas, sent consecutively to the PDA, in order to try and put off encroaching death.

This is Piedrahita and Sopeña’s film debut, but they handle their well-constructed script with confidence and control, and the result lives up to its promise as a hugely satisfying puzzle-filled thriller. The directors skilfully set up the audience’s perception of how things are and then slowly reveal the truth, drip-feeding new information as the story unfolds. They are aided by subtly ambiguous performances from the four lead actors, so we can never be quite sure if anyone is telling all that they know – as revelations come out and suspicions rise our loyalties continually shift. This layer of ambiguity is also effective once the filmmakers show their hand and reveal the truth. As the focus shifts from the question of who the mastermind is to how the protagonists will escape, we really don’t know to the very last minute how it will turn out.

Although some of the story’s twists stretch credibility, the fact that all the puzzles are solveable is a big plus, as it gives the audience some concrete logic to balance the necessary suspension of disbelief over other plot contrivances. Equally pleasing is the vein of witty humour that runs through the script, which acts as a kind of assurance that the filmmakers are having a lot of fun with this story, and we should too.